EABL Elite Eight Round Up - Hoopsfix.com

EABL Elite Eight Round Up 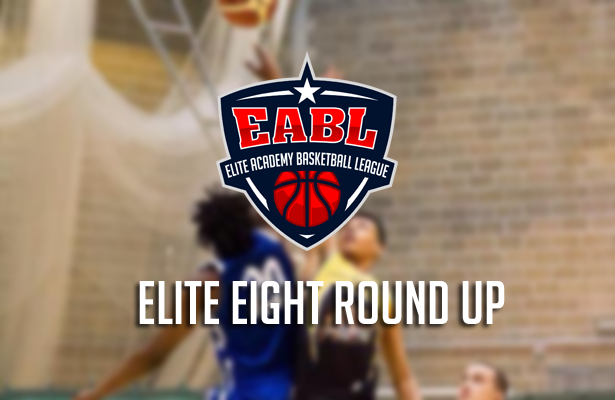 It will be SGS College, Milton Keynes College, Charnwood College and Barking Abbey in the 2013-14 EABL Final Fours, after all won their respective Elite 8 games. The Final Fours begin tonight at UEL Sports Dock in East London, with SGS vs Milton Keynes at 5pm, followed by BA vs Charnwood at 7pm – entry is entirely free!

Milton Keynes College Trojans Basketball Academy became the first team to book its place in the EABL Final Fours by beating a short-handed Itchen College 72-66 on Friday in Milton Keynes.

Itchen had their work cut out, missing top scorer Elliot James and starting power forward Dan Kingswell, and the mountain proved too big to climb.

EABL leading scorer Michael New led all scorers with 27 points, adding 6 rebounds and 5 assists while shooting 13-15 from the free throw line. Max Denham came up big in the second half and finished with 14 points and 3 steals while Callum Rodger added 11 respectively.

SGS College kept their remarkable perfect season intact with a resounding 66-47 win over Myerscough College to lock their spot in the Final Four against Milton Keynes.

SGS took control in the third period, with the game having remained close throughout the first half. SGS locked up Myerscough defensively, holding them to just seven points in the period while extending their lead to 22 points.

Tamas Okros led the way with 12 points for SGS, and Deane Williams chipped in with 10 points. For Myerscough, Montel Dennis was the high man with 11 points, while Emmanuel Kabengele had 12 rebounds to go with his 7 points.

“It was a poor performance from us for sure,” said Myerscough Head Coach Neal Hopkins.

“I was really only interested in the guys doing themselves justice because they deserved to be playing at this stage of the competition, unfortunately we weren’t able to do that.”

“It was a slow first half however the third quarter was all about our style of basketball. Strong defense, running in transition and sharing the ball.”

‘It has been a great season for our programme. To reach the EABL Final Four undefeated is a great achievement especially with the quality of teams that we have faced. Now the focus is in our semifinal. Our record does not mean anything anymore. It’s a knockout competition and we need to be at our best to get a place in the Final.’

SGS advance to match up with Milton Keynes College on Friday night at 5pm.

Barking Abbey booked their place at the EABL Final Fours with an emphatic 75-56 victory over Loreto College on Tuesday afternoon in Manchester.

BA jumped on Loreto from the start, getting an early 10 point lead behind sharp shooting from guard Josh Steel, and had extended the lead to 19 before the halftime break.

Putting in one of their best defensive performances of the season, controlling the glass, forcing turnovers and scoring in transition, BA used a team effort to advance to the national semi-finals at UEL Sports Dock on Friday.

“We played very well defensively, and controlled the offensive tempo for most of the game,” said BA Head Coach Frank Holloway.

“We’re pleased with the win and looking forward to playing in the Final Fours.”

Steel led a balanced attack with 14 points, 11 of which came in the first half, Dwayne Orija added 12, Daniel Ogunseye 9 and Karolis Kundrotas had 15 rebounds to go with his 8 points.

Loreto were led by 13 points and 17 rebounds from Aaron Menzies.

BA will take on Charnwood College at UEL on Friday at 7pm.

Charnwood College provided the upset of the quarter finals, with an 81-78 overtime win over defending champions Harris Academy Beckenham.

The game was as competitive as they come, both teams battling it out to keep their EABL season’s alive. Harris’s Hafeez Abdul hit a tough contested three to force overtime with 3 seconds remaining, but in OT Charnwood used aggressive penetration to get to the line and seal the victory.

Charnwood continued their team orientated scoring which was again very shared, with five players in double digits, led by Josh McSwiggan (18), Jamie Percival (17), Timothy Fava (13), Billy Fox (12) and Emanuel Burton (10). Thomas Yome made a great impact off the bench with 8.

Coach Jarram was pleased to pick up the second consecutive overtime victory of the EABL Playoffs.

“I’m so proud of these guys,” he said. “They kept their composure down the stretch, listened really well and executed tremendously. What they achieved is not a case of stringing together a couple great performances, it’s about what they have committed to doing and worked on all year, everyday.

“It isn’t easy to win on the road, after a long journey at this stage in the competition. Harris were great, we managed to make some plays down the stretch to put ourselves in a good position and in overtime got the job done. I’m most proud that they just never gave in, kept believing and kept battling the full 45 minutes.”

For Harris, the two top performers were Kavell Bigby-Williams and Shaquille Salmon-Freeman who both poured in 18 points each, backed up by Hafeez Abdul with 16 points.

Charnwood will now face Barking Abbey at the Final Fours on Friday night at 7pm at UEL Sports Dock.