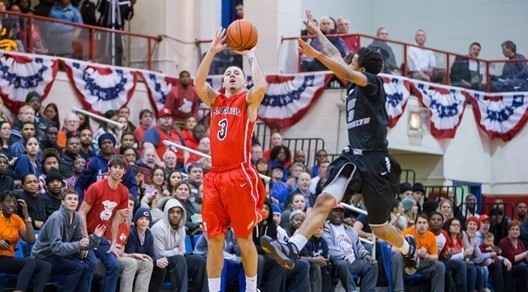 Hakeem Olajuwon and Patrick Ewing are two of the greatest players to ever play the game but they never represented their birth countries in senior  international basketball because they played for America. Ewing was even a part of the great 1992 Dream Team.

That’s why British Basketball should be applauded for trying to put the best team possible on the floor for Great Britain, whether they were born here or naturalized.

The only issue with this kind of recruiting tactic is if they are putting more effort into it as opposed to developing younger players.

This point was brought home more poignantly by two stories on Hoopsfix this week. Sam Neter’s travels with Barking Abbey and England Under 17 1980 tour had too many similarities considering the thirty three year gap. Things like utilizing a shot clock or the proximity of a three point line can be attributed to “cultural differences” but those reasons alone cannot be blamed for the losses. If basketball is to be improved in this country this is where it starts.

It seems like while other countries are trying the emulate America’s basketball success, GB basketball is trying to recruit their lesser players.

Australia has the Australian Institute of Sport that identifies the top sports persons at an early age and enhances their development. Andrew Bogut (former No.1 NBA draft pick) played there and so did Patty Mills. Ben Simmons and Dante Exum got next.

(Funny enough Kyrie Irving was born in Australia, while his father played there professionally, but you don’t see Australia spending an obscene amount of energy trying to get him to represent the Boomers as GB basketball seems to be doing with Ben Gordon)

In a few years time Canada will probably have the second most NBA players next to America.  They had the No.1 draft pick last year with Anthony Bennett and could have another, this coming summer, with Andrew Wiggins. Not to mention the NCAA is littered with Canadian talent at the top level.

As I cover our younger players on a weekly basis I wonder are we doing enough to help these guys. I wonder if there is a Luol Deng or Joel Freeland amongst them.

When you look at the scoring prowess of a player like Ovie Soko, the size of Jack Crook or the shooting touch of Will Neighbour, one can’t help but wonder what if these guys had started playing at an earlier age and didn’t have to play catch-up to their American counterparts?

What if there was a system in place that ensured that the best players are fully prepared (including education wise) so that when they arrive in America they are not forced to go through the JUCO system or redshirt a year?

I do get that the finances play a big part in this there but if they are chasing NBA players, as with Deng we know that insurance for NBA players is through the roof, so it stands to reason that the more NBA players they chase the higher the insurance bill. That money can be used to set up an institute closer to home where top players can be developed.

Obviously this is just one opinion, but Sam toured some amazing basketball facilities while in the USA and they didn’t even belong to the most prestigious teams. That says something. If they had one like that here with the requisite coaching talent it should pay dividends in a few short years.

Anyway while I leave you with that thought process let’s get you up to speed with the round up of the best performances of the British Basketball players in NCAA division one since the Thursday before last.

Mockford was involved in an epic shootout with Sacred Heart last Saturday. Both teams combined for a dozen three pointers in the first half with Mockford being responsible for all six of St Francis’s.

The 6’2” guard didn’t score in the second half until he buried his seventh three pointer to put St Francis ahead for good. He finished with 23 points, three rebounds and two assists. He was an amazing 7-of-8 from three point range.


On Thursday St Francis let a game against Fairleigh Dickinson slip from of their grasp by a point. They were up by six with just over a minute to go but failed free throw attempts derailed them. Mockford finished with 16 points, shooting 4-of-7 from three point range. He rounded out his stat line with two assists and a rebound.

It is good to see Mockford’s shooting touch return after an erroneous start to the season.

Despite being plagued by foul trouble, Neighbour managed to score 18 points and grabbed five rebounds in a loss Georgia State on Saturday. He finished with four fouls.

UALR is now second to undefeated Georgia State in the Sun Belt Conference.

UAB lost both their games over the week and are now at the bottom of Conference USA with a 1-3 record.

Alihodzic was a no show in the first game after being limited by foul trouble. He finished the game, against UTEP, which was a two point loss, with four fouls, five points, three rebounds, three blocks and two assists.

The big man had a better showing on Thursday with a dozen points, seven rebounds and a block, steal and an assist in another loss, which was to North Texas.

Fullah had one of his best weeks in a while. He scored eight points and grabbed seven rebounds in a loss to UNC Asheville on Saturday.

Then he followed that up with 10 points, eight rebounds and four blocks in a win over Gardner Webb on Wednesday.

Saunders had a double double in the first game against UNC Asheville with 11 points and 10 rebounds to go with two assists.

Then against Gardner-Webb he scored 11 points, grabbed four rebounds and dished out an assist.

Luke Nelson scored 14 points in UC Irvine’s only game of the week against Cal State Northridge on Thursday. Nelson, the leading scorer, also had four rebounds, two assists and a steal.

Young had 10 points, seven assists and three rebounds in the win over Cal State Northridge.

UC Irvine is on a six game winning streak and is currently undefeated in the Big West conference.

Ochereobia scored a season high 18 points in a loss to North Dakota State on Saturday. The 6’7” senior centre also had six rebounds and a block.

Against Michigan on Wednesday he only played seven minutes and scored two points and grabbed two rebounds in the loss.

Ovie Soko was held failed to score in double figures for the first time this season against VCU on Saturday. The redshirt senior scored seven points and grabbed five rebounds in the loss.

In another tough matchup against ranked St Louis, on Wednesday, he scored 18 points and grabbed seven rebounds to go with two blocks in another loss.

Thoseby continues to show improvement in his short career at South Dakota. He scored 11 points, grabbed three rebounds and assisted on one shot as South Dakota picked up a win over IPFW on Saturday.

He then scored 10 points to go with three rebounds and an assist in a loss to Western Illinois on Thursday.