GB U20 Women Finish Euros on a High - Hoopsfix.com

GB U20 Women Finish Euros on a High 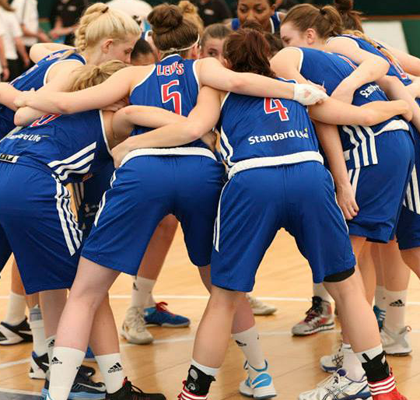 The Great Britain Under-20s finished their Division B European Championship campaign on a high with their second straight win, this time defeating Portugal 65-61.

The victory gives GB an eighth place finish with a 2-6 record at this year’s European Championships.

Shequila Joseph and Harriet Ottewill-Soulsby each had a double-double for GB with 16 points and 10 rebounds each and were supported by Flo Ward and Rosie Hynes who added 10 points each.

“It gives me great pleasure to see how far this group of young women has come over the time we have been at this year’s under-20 European Championships,” said head coach Matt Johnson.

“Today’s game was certainly a deserved victory for many reasons. The first half was the best team basketball we have played in eight weeks of the programme and we fully deserved the margin we took into half time.

“The players followed the scout report to the letter and if it wasn’t for a superhuman performance by Almeida we would have had a much bigger margin still.

“The most important time of the game for us was after we went down by one. Previous journeys have seen us run away from moments like this one but this time our growth and maturity was evident for all to see.

“The stats will tell you one story but this game was for our captain Rosie Hynes who completes her time with the under-20 programme and fully deserves to have finished with two back to back wins.

“I would also like to mention our under-18 girls who have done extremely well in difficult circumstances. Today we were led on the court by Harriet [Ottewill-Soulsby ]and Shequila [Joseph] but we were also led from the bench by Leah [McDerment] and Megan [Lewis].

“As a team we would like to thank all the people that have been supporting us back home and we have certainly laid the foundation stones for the 11 available returning players that have represented GB very well indeed.

“Lastly I would like to thank Lee Davie, Sarah Wagstaff, Darren Finnegan, Matt Smith and Jimmy Bower for being so patient with such a young group, continuing to believe and work hard when things were tough and for supporting me with tireless amounts of work and enthusiasm.”