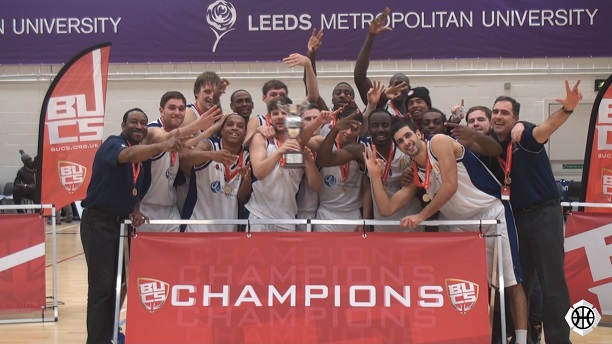 University of Worcester asserted their dominance once again in BUCS competition, beating home side Leeds Metropolitan University 71-62 in the 2013 BUCS Championship Final to win their third consecutive title.

“It feels fantastic,” said Worcester head coach Paul James on the reality of three-peating. “Fantastic for the University of Worcester, and the actual basketball programme at Worcester, so really delighted with it.”

It wasn’t as easy as many predicted. A feisty Leeds Met side remained within striking distance right until the closing moments, and James admitted that at times they had him worried.

“I thought it was a very tough game,” he continued. “I thought Leeds came out and played really really hard, stuck to their task really well and I was worried there for a while, but we made some big shots down the stretch and came through in the end.”

With it being Worcester’s seventh title in the last decade, they have asserted their dominance on British university basketball. Could we see another three straight championships?

Stanley Ocitti was named the deserved MVP, being unstoppable throughout the tournament, averaging 23.3 points per game, most of which came against double teams.

“My hat goes off to Leeds, they played very tough,” said a humble Ocitti after his MVP performance. “It was tough, everybody played hard, and at the end of the day it was fun.

“My hat goes off to my teammates, they passed me the ball so they really deserve the credit instead of me.”

Ocitti finished with 15 points to lead Worcester in the final, along with Arnas Kazlauskas who added 15 of his own. Sherrad Prezzie-Blue chipped in with 13, whilst Dave Ajumobi once again led Leeds with 15. Rob Marsden finished with 13, and Armand Anebo added 12 for the runners up.

Did you catch the game? Thoughts?