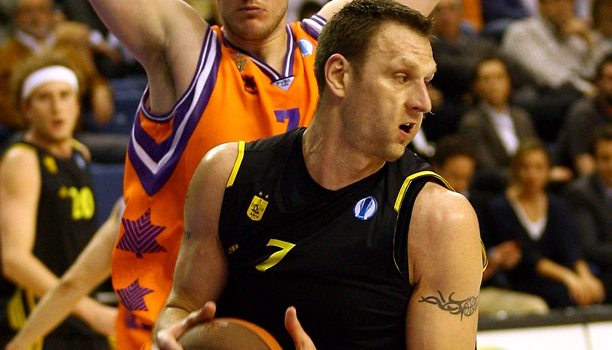 With the 2013 Euroleague Final Four coming to London, the Euroleague sat down with someone who knows all about it; former GB centre and Euroleague stalwart, Andy Betts, for a Q & A. Republished with full permission from the Euroleague.

The only English national player ever to appear in a Euroleague title game is veteran center Andy Betts, who discovered basketball at the age of 15 with the country’s oldest continually operating basketball club, the Leicester Riders.

Just seven years later, Betts played in his first Final Four with Fortitudo Bologna in 1999, but lost in the semifinals. Six years after that, he was part of arguably the biggest upset this century, when Tau Ceramica toppled semifinal opponent CSKA Moscow, which had a 17-1 record and was hosting the 2005 Final Four. Betts and Tau fell short in the title game against double-champion Maccabi that year, but his memories are nothing but positive.

With eight Euroleague seasons and national titles in both Spain and Greece, Betts is perhaps his country’s most accomplished basketball player ever, and at 35 years old looking for a team he can help add more such accomplishments.

With the Final Four just three months away, Betts is also the best possible person to explain to sports fans in England why they shouldn’t miss it. “Except for the Olympic semifinals and final, they will never see basketball at this level of intensity in the country again,” Betts recently told Euroleague.net. “With all respect to the NBA, I see that recent game in London more like an exhibition. To me, the Euroleague Final Four is at a different level. From the skill level they will see to the intensity, the importance… they really should go if they have the chance.”

Growing up in England as a basketball player, how was the sport regarded in that time?

Andy Betts (AB): Well, I started basketball really late, when I was 15. The sport was not played in the schools, at all. Most schools concentrated on rugby, soccer and stuff like this. It is not one of the main sports, so it was difficult to find somewhere to play. It all started for me when I joined the Leicester Riders. They were great and gave me a lot of good coaching and somewhere to play. It really started fast for me.

When you started, who were your role models in British basketball?

AB: When I first started, I didn’t know too much about the NBA, European basketball and all these things. I knew guys that most people probably don’t know. There was a guy called Dave Harris, a veteran player for the Leicester Riders, who played the same position I did. He helped me a lot and I worked a lot with him, learning low-post moves and many others things. There were a few veteran American players who were really good, Eugene Waldron and John Tresvant. These guys were a big help to me when I was starting. I was lucky with the guys I was with; they were really good with me. When I started playing with the national team, I was around 19 and players like Steve Bucknall, Peter Scantlebury and Ronnie Baker were a huge help to me. All these guys made feel welcome to the national team even when I was so much younger than them.

You played two Final Fours, the last one of them with Tau Ceramica in 2005. What do you remember about it? How special was it to be in that Final Four in Moscow?

AB: Obviously, every Final Four is huge for any player in European basketball. It is the event that every player wants to be at, the absolute thing that every player tries for. Moscow is a basketball city; the best team, CSKA, is really strong and the fans really, really love basketball. We had to play against CSKA in the semifinal and knew how difficult it was going to be. We knew we had a great team – if you look back at our roster that year, it was incredible. Our level of talent was pretty crazy and we felt we could do it. And we did that, we beat CSKA in Moscow! 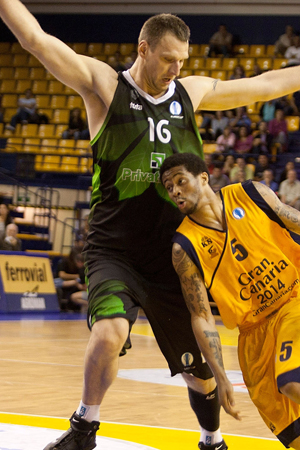 And you went to the final against Maccabi. It was the only Euroleague final you played in your career. What do you remember from that game?

AB: Well, I think Maccabi was one of the best teams in European basketball history, with Jasikevicius, Parker, Vujcic, Baston and a lot of good players. They won two Euroleague titles and played a little better than us that day. We didn’t play bad, but they played an incredible game and didn’t really give us a chance. We got close, but not close enough. They had been in that situation before and just were better than us that day.

How much fun was to be part of that?

AB: It was just an amazing experience. There were a lot of media and VIPs there, as well as fans from all over the world. It is something that every basketball player wishes that he could do.

You also played that 1999 Final Four with Fortitudo Bologna against cross-town rivals Virtus. How was it? Was it a lot different from the one you played in 2005?

AB: When I played my first Final Four in Munich, I didn’t realize how big an event it was because I just had come out of college and it was my first professional season. At first, I didn’t understand how big the event was. I had never experienced anything than that. The crazy thing is I think that we played against Kinder seven times that season and won six of them, but lost this one game in the Final Four in Munich. They took their game to the next level and beat us that night. They had a very good team with Rigaudeau, Danilovic and Nesterovic. They really stepped it up that day.

How would you explain to British fans the kind of basketball they are going to see in the Final Four?

AB: I can’t stress to them enough – if they have the chance to go see it, they should. I don’t think that, except for the Olympic semifinals and final, they will ever see basketball at this level of intensity in the country again. With all respect to the NBA, I see that game recently played in London more like an exhibition. To me, the Euroleague Final Four is at a different level. From the skill level they will see to the intensity, the importance… they really should go if they have the chance.

Additionally, why should a Euroleague fan should go to a Final Four in London?

AB: Obviously, if they know the Final Four, they know what to expect, but London is a very attractive city. The O2 is an amazing facility. I don’t think there are many better arenas in Europe, if any. London is an amazing city. In my opinion, the Euroleague could not have chosen a better city to host it. I truly think that everyone will see it and at the end of it be happy that it was there.

How do you like the combination of hosting a top-class basketball event in such amazing cities like Berlin, Paris, Barcelona, Istanbul and now London, just to name the last five hosts?

AB: You listed some great cities there! The Euroleague has chosen really good places to host the event. London has many, many things for Euroleague fans to see during the day. The Euroleague sets up a lot of basketball activities around the competition. Everyone will find interesting things to do while they are in London, I am sure.