Happy Birthday Pops Mensah-Bonsu! Pops turns 29 today, so we thought we’d take a look back at his career so far with this video based timeline…

Growing up in North London, Mensah-Bonsu played under the legendary Joe White at Hackney White Heat before moving to the US. He spent his sophomore year of high school playing at the Hun School of Princeton in Princeton, New Jersey, then transferred to St. Augustine College Preparatory School in Richland, New Jersey, where he averaged 15 points, 12 rebounds and four blocks per game as a senior.

Pops played his college ball at George Washington, where he averaged around 15 points per game for his career and was second team all-conference in 2004–05.

Out of college, Pops went undrafted, before signing a two-year contract with the Dallas Mavericks, and playing for the Fort Worth Flyers, the NBA D-League affiliate of the Mavericks. He made the D-League All Star Team and was MVP of the game, with 30 points and 7 rebounds.

Mensah-Bonsu was recalled to the Mavericks in February 2007. He scored his first NBA points against the Atlanta Hawks. Not a lot of footage seems to exist of Pops in Dallas, but managed to dig up this from his time with them in the Vegas Summer League:

This is all that seems to exist of his time in the D-League as well – a nasty windmill!

For the 2007–08 season, he played with the Italian Serie A team Benetton Treviso, averaging 8.3 points and 9.2 rebounds, shooting 59% from the floor and 77% from the free-throw line – no footage seems to exist though.

In May of 2008 he joined CB Granada of Spain for a single game, in which he scored 22 points, grabbed 9 rebounds, had 3 steals and 3 blocks.

Pops inked a one-year deal with the Spanish ACB team DKV Joventut. He was released in December due to a shoulder injury, after averaging 18.5 points per game in 2 league games, and managed to pick up some honours in the Euroleague too:

In February 2009, Mensah-Bonsu began playing with the Austin Toros, the San Antonio Spurs D-League team. In his eight games with the Toros, Mensah-Bonsu averaged 26.6 points, 13.0 rebounds, and 2.5 blocks per game(!). By the end of February he had picked up a 10 day contract with San Antonio.

After being released by San Antonio, Pops was picked up by Toronto in early March – where they gave him a guaranteed contract until the end of the season. It was with the Raptors, Pops really made a name for himself, becoming a fan favourite and making appearances on Sports Center.

Pops joined Houston for the beginning of the 2009/10 season to help with front court depth after an injury to Yao Ming. Pops’ stint in Houston lasted two months, being released in November, before being picked up by Toronto again to help with their injury problems.

In January 2010, Pops was released by the Raptors to make room for their returning injured reserves,and signed with PBC CSKA Moscow in Russia – and soon became known for his high flying antics. Check out these crazy dunks all from the same game (feel free to mute the sound).

Whilst at CSKA Moscow, Pops entered into the dunk contest, competing in arguably one of the greatest dunk contest ever (that nobody knows about!). Featuring Pops, along with Gerald Green and James White…it.was.crazy.

Hoopsfix gotta be in here somewhere right?! In the summer of 2010, during the middle of the Back British Basketball campaign, Pops went OFF against FYR of Macedonia! Mensah-Bonsu was part of the GB team as they qualified for Eurobasket 2011 with a 6-2 record. During qualification he led all Division A players with 13.5 rebounds per game, and also finished sixth in points (19.3), and blocks (1.3).

Pops returned to the NBA the following season, where he played for the New Orleans Hornets, but was released in January 2011 as he saw limited minutes.

In February 2011, he signed a contract with the French team ASVEL Villeurbanne until the end of the season. He averaged 17 points and 10 rebounds in his 12 regular season games, before his season was cut short after sustaining a shoulder injury.

In the best season of his professional career, Pops killed it in Turkey, helping them win the treble whilst averaging 12.8 points and 7.8 rebounds in the Turkish League, and 18.5 points and 11.8 rebounds in the EuroChallenge….and taking a lot of scalps at the same time!

Pops became an Olympian, representing GB in his hometown with averages of 11.5 points and 7.2 rebounds per game. 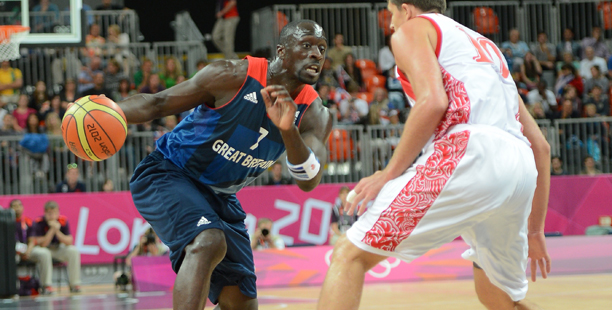 Pops has now signed a two-year deal with Maccabi Tel Aviv in Israel where he will make his debut in the coming weeks. They put together this awesome welcome video for him:


And that brings us to the present day! You can also check out some pretty cool Pops career highlight mixes here, here and here!

What is your favourite Pops highlight? Let us know in the comments!