There was no bigger surprise with the Great Britain squad this summer than rising young star Devon van Oostrum being one of Chris Finch’s cuts, and providing a little insight into the situation, the GB head coach has said Devon needs to learn when to reign in the aggressiveness he is well known for.

Since his release, DVO has joined up with the GB U20s and seems to be playing with a point to prove, averaging 26.5 points, 4.5 rebounds and 7 assists through two games, both victories, including a huge upset win over Croatia. 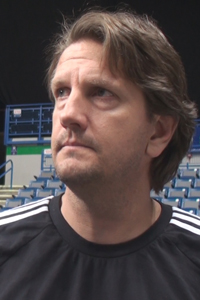 “Devon is an outstanding player, he’s certainly a bright player for our future,” explained Finch in Sheffield on Friday. “We have a number of players in our team that are all on an even level and the decision to go with one or not go with one is always going be a hard one when that’s the case.

“But he’s young, he’s used to basketball at a very high level and he’s obviously leading his team there and that’s what he needs to do. He needs to find a way to be the main guy but also lead his team make his teammates better and achieve meaningful results, they’re off to a great start and that’s really important in those types of tournaments.”

Finch doesn’t hesitate to admit DVO has a bright future, going as far as to say he’s a potential NBA prospect.

“Certainly I would say he has a chance to make the NBA, I don’t think he’s quite there yet. I think he’s got a lot in his game he needs to clean up, he’s got some unique skills, and he can really read the game, he plays with a fearlessness which you love but he just has to be a little bit more in control and not try to make every play.

What do you think? Agree with Finch’s comments?