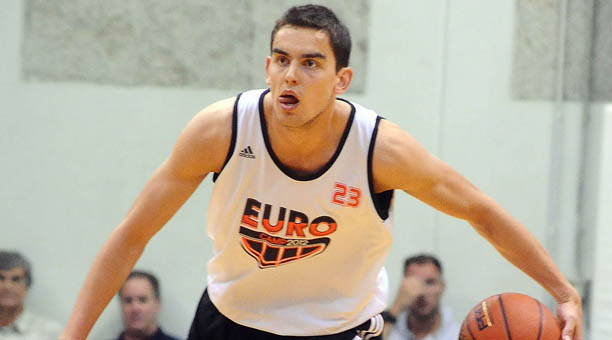 The tenth annual Adidas EUROCAMP tipped off on Sunday with a number of European prospects gathered in Treviso, Italy, in the only officially sanctioned NBA pre-draft camp. More than 45 early entries and draft-eligible players took part in drills and competition on day one.


All players had to go through individual physical testing done by BAM Testing, this included vertical leap tests, sprints and slides. Check out the short video above giving you a little taste.


The most highly touted prospect in attendance, Evan Fournier, went through an individual workout in front of a number of NBA scouts and other teams’ staff. He struggled with his shot a little, but is a projected first rounder on most mock drafts.

Devon van Oostrum is the only British player in attendance, and as a 1993 born, is one of the youngest players here (the youngest is 1995 born Metecan Birsen, there are two other ’94s and seven ’93s). Despite doing well in the early session, in the full 40 minute game situation he played far off the level he is capable of and was well aware of it, getting visibly frustrated. Devon will look to bounce back on Day 2.

Play of the Day


The play of the day ended up happening in the exhibition game between Australian Institute of Sport and Benetton Youth team as part of the camp. Owen Odigie took off and punched this nasty dunk on the Italian big man (unfortunately, it wasn’t their 7’4″ center!).

The final game of the day put an All-Star team selected from the day’s action against Russia’s U20 side. All box scores from the games can be found below:

Stats:
Team 1 vs 4
Team 2 vs 3
AIS vs Benetton Youth
Eurocamp All Stars vs Russia

What the Web is Saying