The Great Britain Under 20s begin their European championship campaign tomorrow, and expectations for promotion are higher than ever before.

With the under-20 women making some noise in their first year in Division A, and last year’s near-miss (where Tim Lewis’ side missed a semi-final place on point differential after going 4-1 in the first two rounds), the feeling is that nothing less than promotion will do this time around. That’s certainly how the players feel, with Ryan Richards & co confident of bringing home the gold.

So what’s the current state of the team and what are their chances for promotion?

They continued their good form with two victories over the Netherlands (98-80 and 60-55) and confidence was running high after they beat Denmark 79-66 and 70-58.

The team crashed back to earth as Belgium thrashed them 94-71, and despite a much-improved GB performance the next day Belgium again ran out winners, 85-74 this time. 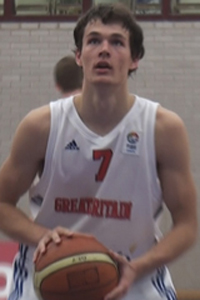 Van Oostrum will run the point

Point guard. Devon van Oostrum is the youngest player on the team, but his talent automatically makes him a leader. He’s comfortable on the ball, scores, and makes passes no other GB player can. Levi Noel has been deployed mostly as a point so far, but is versatile enough to play the 2 or 3 as well. Lee Reilly has struggled under defensive pressure at times and does not offer much of a scoring threat.

Shooting guard. Alex Marcotullio is money from long range and is an active defender who can run the point in a pinch. Adam Thoseby and John Bantock also bring perimeter scoring, but don’t possess Marcotullio’s all-round game.

Small forward. Will Hall will be used primarily as a defender, where his length and sound fundamentals allow him to guard multiple positions. Will Saunders brings athleticism, hustle and the occasional outside shot.

Power forward. Ali Fraser is a load down low, and has a nice scoring touch around the basket. Lee Goldsbrough is a good match with Richards in the frontcourt, bringing toughness, defense and rebounding.

Centre. This team doesn’t have too many scorers, but when you have Ryan Richards do you need anyone else? The Spurs draftee can take players off the dribble, score in the post, hit the mid-range J and spot up for 3s – though he hasn’t yet reached the same level of dominance on defense or the boards. Ali Mackay has shot-blocking skills and moves well for his size, but needs to get stronger.

Notable absentees
The team is arguably weakest at the three, but had Ovie Soko been available then that position would have been one of their biggest strengths. Teddy Okereafor would have helped to shore up the point guard spot, and the absences of Raheem May-Thompson and Ryan Martin mean that only three players return from last year’s team.

The Big Two. Richards and van Oostrum are Division A-calibre players who can win games by themselves. Every team in the tournament will find them tough to stop.

Three-point shooting. GB have a number of outside threats, with Marcotullio, Thoseby, Bantock and van Oostrum all deadly if left open and Richards, Saunders and Noel also capable of hitting threes.

Size. GB boast great size at every position. Their starting five will be bigger than most and they could opt to go bigger than that at times – a lineup combining 6-5 guards Noel and Thoseby with a frontcourt of Saunders, Richards and Goldsbrough would cause serious matchup problems for opponents.

Rebounding. GB were killed on the boards against Denmark and in the first game against Belgium, allowing their opponents far too many second-chance points and creating few for themselves.

Defense. Belgium’s guard penetration caused GB all kinds of problems, and their lack of a dominant interior defensive force could make it tough for them to get stops against the tournament’s better teams.

The bench. The team has faltered at times when key players have sat. Foul trouble and fatigue will afflict GB’s starters at some point, and right now it’s hard to be confident that the reserves are capable of stepping up.

Newly-relegated Czech Republic possess a pretty good point guard of their own in Tomas Satoransky (who Eurohopes rates as the second-best prospect in the age group), and are likely to provide the toughest test in GB’s group. Finland came second to the Czechs at U18 level last year and will also be a tough out, while things should get easier against Norway, Portugal and Luxembourg. Israel and Belgium will await in the second-round, and the Belgians looked extremely impressive in their warm-up wins over GB.

It’s unlikely that GB can afford more than one loss if they hope to advance to the semi-finals, which on the evidence of the losses to Belgium could be slightly too much to ask. There is no doubt this team has the talent to win promotion, but they’ll need to put it together consistently in a way that they haven’t quite been able to do so far.

What do you think of their chances of promotion? Drop a comment and let us know!