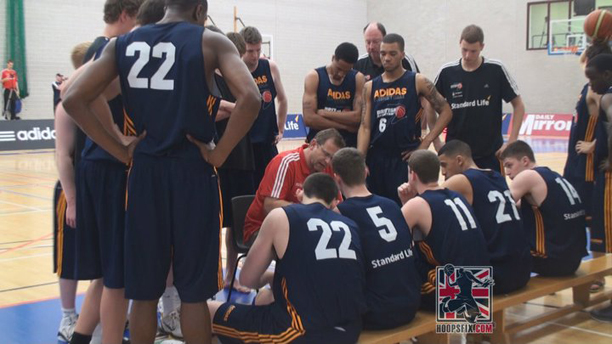 The Great Britain Under-20s eased into their preparation for the Division B European Championships this summer with two easy victories over the Scotland Under-23s this weekend at the Braintree Campus, Colchester.

The games were a chance for Head Coach Tim Lewis to assess his 19-man squad in game situations in anticipations of cuts this week.

In the first match-up on Saturday, it took GB three quarters to find their rhythm before they eventually routed Scotland 77-50 behind a 26-8 fourth period. Great Britain were led by 22 points from sharpshooter Adam Thoseby, Canadian-based John Bantock added 10, Ryan Richards 9, Devon Van Oostrum and Levi Noel with 8 points each and Will Hall added 6.

On Sunday the GB U20s had less trouble dispatching of Scotland, coming out with 86-65 victory. Ryan Richards provided the initial spark, having 13 points and 7 rebounds in 7 first quarter minutes to give GB a 25-9 at the first break. The lead was stretched to 52-21 at the half with Scotland having no answers for Richards or the rest of the GB squad.

In the second half Lewis predominantly ran his fringe players, allowing Scotland to capitalise-winning both the third (23-19) and fourth (21-14) quarters.

Richards was dominant in limited minutes, finishing with 17 points, 8 rebounds, 3 assists, and 2 blocks in a little over 15 first half minutes (check video of Ryan’s highlights here). Adam Thoseby had 15, Will Saunders 12, Alasdair Fraser 10, Jack Thompson 9, Lee Goldsbrough and Shore Adenekan 6 a piece.

Tim Lewis is happy with how the first three days have gone so far;

“It was good for our preparations. The first three sessions gave us the opportunity to look at players we haven’t seen before, so it was very positive all round.

“The venue is good for us, it’s a great floor and we’ve had it to ourselves. It’ll be good to come back here in July.”

The squad will now return to training camp before taking on Holland in back to back games in Bristol on the 25th and 26th June.