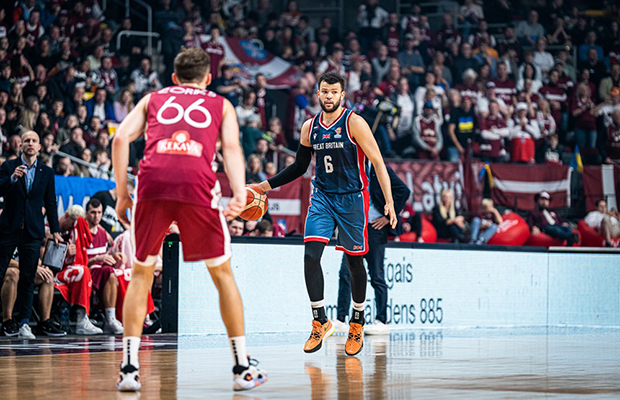 Playing for pride after their hopes of FIBA Basketball World Cup 2023 qualification were ended against Serbia on Friday, GB were unable to come up with a win, falling 79-63 to Latvia in Riga on Monday night.

Latvia led by as many as 20, taking advantage of defensive lapses and GB’s inaccuracy from the field to secure a comfortable victory, having already qualified for their first World Cup appearance next summer.

Luke Nelson led the scoring for GB with 16 points and 8 assists, while Gabe Olaseni added 14 and Carl Wheatle had 10.

“Latvia are a very high performing basketball team, we knew we were in for a difficult challenge,” GB Head Coach Marc Steutel said after the game.

“I think they’re extremely talented but not only that, they know how to utilise their talent.

“This is a challenging environment and we’ve got a range of guys in our group that have different levels of international experience and I think for those guys to be exposed to this level and fight and compete the way we did, particularly when the game was creeping away at certain points, I’m really proud of the effort and the competition in our group and that’s something we’ve got to build on in the future.”

A defensive lapse saw Latvia beat the buzzer to hold a 20-17 lead after the opening period.

An 8-0 run midway through the second put Latvia firmly in the driving seat, as GB were unable to buy a basket from beyond the arc, going 0-for-10 in the first half to trail 40-28 at the break.

Luke Nelson nailed GB’s first three point attempt of the second half in what they hoped would be the start of a change in fortunes, but Latvia would only continue to pile on the pressure, taking an 18 point lead into the fourth

GB finally started finding their range in the fourth, with Whelan and Mockford knocking down triples to force Latvia into a timeout, but the home team re-grouped, knocking down back-to-back threes of their own out of the timeout and cruising the rest of the way.