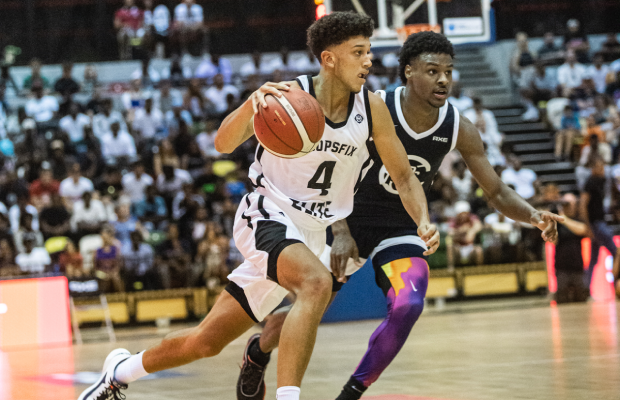 Hoopsfix Elite defeated California Basketball Club 81-74 in an exhibition game in front of a sold out crowd at the Copper Box Arena, in London.

Latrell Davis added 14 points off the bench with Brandon Tchouya scoring 13 and Sultan Adewale with 12.

“It was an amazing event,” Ellis told Hoopsfix. “A sold out Copper Box, the atmosphere was there, the level was really high and we got the win.

“It was a big privilege to represent Hoopsfix and [the UK] as an Under-19 team.

“The run in the fourth was based on our defence. Killing us on the glass a bit, we tried to box out and everyone crashed the glass and that’s the reason we won today.”

Bronny James had a quick five points as CBC moved into an early lead, but triples from Ben Brown and Ellis sparked the crowd into life with an 8-0 response from Hoopsfix Elite.

Ellis continued to show his shooting prowess with a trademark pullup from the elbow before an 8-2 close saw CBC move 21-19 ahead after 10 minutes.

Dylan Metoyer began to heat up in the second with a pair of threes in a 10-1 start to put the American side into a 31-20 lead. Ellis responded from downtown out of the timeout to start an 8-0 run with Davis converting an and-1.

However, CBC stayed ahead and took a 47-42 advantage into the half-time break with Cofield producing the highlight from the first half with a nasty poster

Adewale quickly put Hoopsfix Elite back in the lead at 49-48 with a strong finish inside with another big and-1 play from Davis coming later in the quarter.

Hoopsfix took a 61-58 advantage into the final quarter and began to pull away in the fourth as they scored eight unanswered points to establish a commanding 12-point lead.

CBC were not done and they rallied to close the gap to 76-72 inside the final two minutes to set up a nervy finish, but Hoopsfix held on to get the win.