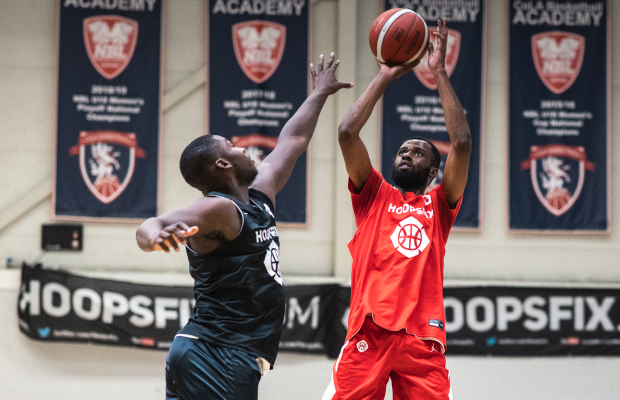 There were wins for Run & Jump, Glacier Boys, Hoospace and Elite Bulldogs on Week 1 of the men’s Hoopsfix Pro-Am at City of London Academy, on Sunday.

Run & Jump took down a strong Worthing Thunder roster in a 68-50 victory to set the tone in Pool B with Elite Bulldogs eventually seeing off London United, 55-51. Meanwhile, Glacier Boys defeated CoLA 69-56 to open up Pool A action with Hoopspace coming from behind to edge out Thames Valley Cavaliers for a 44-42 triumph.

Kayne Henry then inspired a close victory for Hoopspace with a game-high of 16 points as they outscored Thames Valley 17-9 in the fourth quarter to take the win. TVC had led by as many as 10 with 6:39 to go, but Henry sparked a 13-0 run capped by Tola Okiki’s go-ahead three to make it 42-39.

Run & Jump then signalled their intent with an impressive win over Worthing Thunder as Kyle Carey stood out with a 21-point performance. Josh Apple was also in double figures with 12 points as they overcame the challenge of Worthing led by Matthew Bryan-Amaning and Lovell Cook.

The final game of the day saw Elite Bulldogs come through a nervy encounter with London United behind 14 points from Elvisi Dusha. GB international Dwayne Lautier-Ogunleye – fresh from a Championship in the Netherlands – had the hot hand early and finished with eight points, five assists and three steals in the four-point win.

Week 2 action sees Glacier Boys take on Hoopspace and CoLA go up against TVC in Pool A, while Run & Jump meet Elite Bulldogs in an unbeaten clash in Pool B with London United and Worthing Thunder searching for a first win.

You can re-watch all of the Week 1 games below: