Team White pick up the win in Under-19 Men's game at #HASC22 - Hoopsfix.com 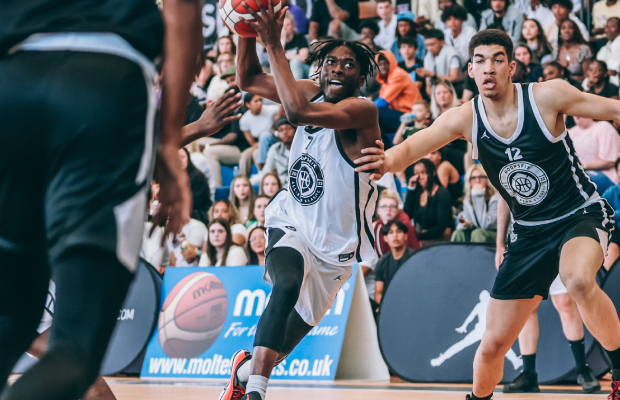 Team White picked up the win in the Under-19 Men’s game as they defeated Team Black 96-85 at the 2022 Hoopsfix All-Star Classic at Crystal Palace, on Saturday afternoon.

Quinn Ellis claimed a second MVP award of the day with a near triple-double of 15 points, nine rebounds and eight assists in the win in front of a crowd of 1500.

Louie Jordan also starred with a game-high of 22 points on 7-of-8 shooting off the bench, while Brandon Tchouya made a bright start early before finishing with 15 points.

Tchouya started aggressively with seven early points, while Jordan hit a couple of threes to help Team White lead by as many as seven in the opening quarter. Michael Belle checked back in for Team Black with an immediate and-1 opportunity to help his side close the gap to 21-18 after 10 minutes.

The Strasbourg-based guard put them ahead early in the second, but Team White regained the initiative through back-to-back triples from Ellis and Ben Michaels. Tchouya moved into double figures in the midst of a 13-0 run capped by a Pedro Ellery three to push the lead out to 14 points.

There was another three-point shootout to end the half as Ellery connected again in between long range efforts from Charles Okafor and LA Casinillo before Joe Buchanan had the final say with a three at the buzzer to make it 53-41 to Team White.

Team Black rallied in the third with Oliver Wright netting six points in a bright spell to reduce their arrears; keeping their opponents to just two points in the first five minutes. The scoring picked up from both sides with Ellis beginning to take over to keep Team White in front as they led 63-58 heading into the fourth.

Belle made it a one-point game in the fourth at 74-75, but threes from Charnwood duo Victor Ndoukou and Jordan helped Team White break away down the stretch.

Josh Ijeh then had the play of the game for his first made field goal of the game with a nasty poster to send the capacity crowd wild and force a timeout.

From there, there was no way back with Jordan putting the finishing touches on the win with a couple more triples as Ellis came close to a triple-double.