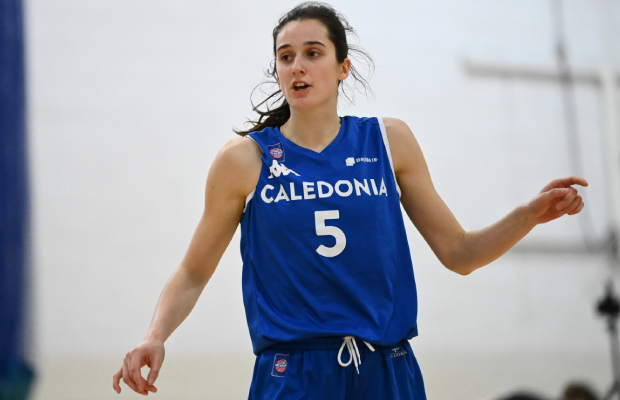 Sian Phillips has been amongst the most consistent performing players in the WBBL in the past 18 months or so and is currently playing a major role in pushing Caledonia Pride towards a long-awaited post-season return.

The Scottish franchise have not competed in the WBBL playoffs since the 2017-18 season – back when Phillips was a teenage rookie in the league – but are well placed entering the final few weeks of the regular season.

Caledonia put together a club-record run of seven consecutive victories to surge into the top eight as they begin to realise their potential.

“This is something that this team has worked for since the beginning,” Phillips told Hoopsfix. “Finally seeing these results on paper affirms all the hard work we’ve put in individually and collectively behind the scenes to make it happen – it’s definitely a good feeling.

“I think the biggest factor has just been time. Nothing drastic, we just needed time to train and play together to get more comfortable with our desired style of play.

“I think we have had the means to be successful for a while now and individually we have all the parts, we just needed to put them together.

“We trusted the process and knew that over time our hard work would pay off and eventually we would start seeing results.”

Pride had lost eight of their first 10 league games before a change in fortunes coincided with astute mid-season arrivals of American duo Taylor Edwards and Laken James as well as former GB international Erin McGarrachan with the trio making instant impacts.

James leads the team in scoring averages with 16.1 points per game, while Edwards has numbers of 13.1 points, 7.2 rebounds, 5.4 assists and 3.3 steals per outing and McGarrachan putting up 8.9 points and 5.9 rebounds per game in 20.9 minutes off the bench.

“It is not easy to join a team that has played multiple seasons together, struggled and learned together, and built a strong bond through it all,” explained Phillips.

“However, not only have they brought experience, skill and knowledge, but they became the pieces needed to solidify this Pride team. They each bring unique and valuable qualities that have helped grow and connect our team.

“It was a tough start to the season. There were lots of games that we knew were within our reach and we missed out because we lacked consistency.”

The experience, in particular, has helped a predominantly young roster. This has been the Caledonia Pride way since they joined the league in 2016 as they hand opportunities to Scottish players to test themselves at a high level with the likes of Pollyanna Storie and Ella Doherty shining examples in recent years.

And, Phillips, too, knows first hand the benefits this can have on a player’s progression.

“To have already played five years in the WBBL and, in recent years, playing significant minutes has been key to my development,” she stated. “I feel like there is no better way to improve than to play with and against players that are better than you.

“Caledonia Pride has always ensured opportunities for promising young female players to step up their game. Not only is this important to the individual players in their development, but also vitally important to Scottish basketball development. It gives youth a pathway directly to the highest level of basketball in Britain.

“Having this pathway based solely in Scotland inspires and motivates so many young players just starting out. It creates a link between the youth players and pulls more Scottish players to a higher level.”

Phillips has developed into a central figure of the team since making a WBBL debut nearly five years ago with the 22-year-old moving to the top of the club’s all-time leaderboards in scoring, rebounding and assists.

This season has seen Phillips averaging 15.1 points, 7.7 rebounds, 2.3 assists and 1.7 blocks per game in league play with two of three double-doubles coming in the last two games having stepped up the level of performance since the start of 2022.

“I think it’s been a season of change and a lot of adjustment,” stated Phillips. “So I feel like as the season has progressed and our team has become more stable it has allowed me to settle into my role. I am pleased with my performance but not fully satisfied.

“I know there are so many aspects of my game that I can improve on. I strive to be a well-rounded player: one efficient on both ends of the floor as well as a good teammate. This is what I’ll continue working on in all the small ways, day by day.”

Phillips began playing basketball at the age of 12 and found a love for the game playing in the Scottish national leagues, which soon led to regional and national recognition. The opportunity to join Caledonia followed with the chance to compete against professional players on a regular basis.

Naturally, there were early struggles in adapting to the demands at the highest level, but Phillips leaned on the knowledge and experience gained with the subsequent rise being a rapid one.

Phillips enjoyed a breakout 2020-21 season as averages jumped out to 13.6 points and 11.7 rebounds per game with 12 double-doubles throughout the campaign. The maintained performance levels lead to the question of a possible GB call-up with the potential to follow in the footsteps of former teammate Hannah Robb – who became a Senior debutante in the past year.

The duo reunited earlier this week to help Scotland qualify for the Commonwealth Games 2022 3×3 tournament and Phillips would relish any opportunity to represent GB, should it arise.

“My pure love for the game and competition is what have driven me to take these opportunities on, so a chance to experience GB would of course be exciting.

“Watching female athletes who play at the highest level while representing our nation is inspiring to anyone.

“Hannah Robb, for one, has shown me that someone from the same club can get such an opportunity by staying hard-working, disciplined, and trusting. I find that amazing and inspiring to not just myself, but the young female Scottish players.”

Pride have four games remaining with road games against Essex Rebels and London Lions bookended by home games with Sheffield Hatters and Cardiff Met Archers. The teams below them have games in hand with an exciting finish to the regular season in store.

The stakes are high and Phillips is determined to ensure Caledonia come out on top in the battle to make it into the top eight.

“We still have some important games coming up that are key games for us,” concluded Phillips. “It’s almost as if our post-season starts now with every game counting. Our mindset doesn’t change, though.

“We want to keep pushing and step up our game to the next level to really compete with the teams in the top spots. It will take a lot of hard work, and as previously mentioned, consistency.

“Pride haven’t made it to the post-season since my first year and to make it to the playoffs would be a massive achievement for the club.

“We owe it to ourselves and to the team to not only make this push for success in the playoffs, but to use this last part of the season to show everyone what Pride is really capable of.”