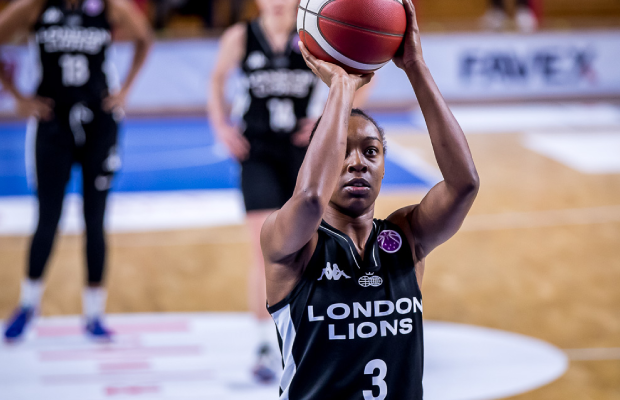 London Lions’ remarkable debut EuroCup campaign came to an end on Wednesday evening as they were beaten 96-65 on the road against top-seeded French side, Bourges.

Mark Clark’s side held a slender one-point advantage following a historic victory at Crystal Palace in the first leg and were without influential star Jo Leedham-Warner due to French government regulations following COVID-19 protocol delays in the US.

The game was originally scheduled to take place on December 22, but was postponed due to COVID-19 protocols as the Lions returned multiple positive tests.

Shanice Beckford-Norton and Azania Stewart top scored with 13 points each with Cassie Breen – who missed the first leg – adding 11. Bourges had five players in double figures, led by Keisha Hampton’s 22 points as they secured a 160-130 aggregate victory to advance.

Winterburn opened the scoring with a nice move, but WNBA centre Iliana Rupert scored seven points in a 12-2 response inside three minutes. Bourges quickly established a double-digit advantage overall and led 26-15 at the end of the opening quarter as Cassie Breen scored five points in quick succession.

The opening score of the second saw the Lions back within single figures, but another barrage followed from the hosts with 12 unanswered points. Chantel Charles hit a three to stop the rot with Breen adding another to close the half in a bright spell, despite still facing a 57-35 deficit.

The Lions continued to battle and edged a low-scoring start to the third as they held Bourges to just three points through six minutes. However, Bourges would increase their overall advantage and take a 70-47 lead into the final quarter with Winterburn ending the quarter with a three.

Bourges finished strong in the fourth with a further 26 points to close on the century mark as the curtain was drawn on a historic European campaign for the Lions, who now turn their attentions back to domestic action with a quadruple well within their capabilities.