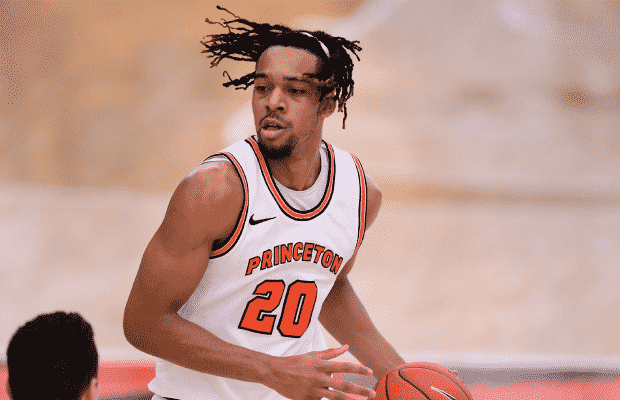 Two months into the college season, we take a look at how the leading Brits closed out the calendar year of 2021.

Tosan Evbuomwan had another big month for Princeton (10-3), starting with 14 points on 7-of-10 shooting in the opening game. He then scored a career-high 27 points including the game-winner along with seven rebounds and six assists in an OT win over Drexel. Evbuowman also scored 16 points and had a 9-8-8 stat-line before netting a further 18 points against UMBC.

His 5.5 assists per game lead the @IvyLeague, as does his field goal percentage of 55.5%!#MakeShots 🐯🏀 pic.twitter.com/VklDpBvZL0

RJ Eytle-Rock netted a season-high of 14 points against New Orleans, whilst also scoring 11 against Weber State in back-to-back wins for Utah State (9-5) with Zion Tordoff posting a season-high of 19 points to go with 10 rebounds for a double-double for Houston Baptist in their 84-67 win.

Caleb Fuller had a big finish to 2021 with 15 points, 13 points and then a season-high 17 points against Portland in a 60-65 loss to take a season average into double figures for UC Davis (6-4) with Ade Adebayo netting a best of eight points in a run of starts during the month.

A trio of Brits starred for Montana State (9-5) with freshman Great Osobor continuing to increase his production off the bench with 16 points on 5-of-6 shooting in just 15 minutes as well as two other games with eight points. Amin Adamu had a best of 14 points in December along with the game-winner against Portland, while Jubrile Belo posted a season-high 22 points along with seven rebounds and two blocks and also had 18 points and eight rebounds at Sacramento State.

Dan Akin started December averaging 15 points per game through two games then posted a career-high 24 points on 10-of-12 shooting with nine rebounds at UC Riverside. That preceded a double-double of 17 points and 14 rebounds for CBU (10-3) to help snap a two-game losing slide.

There was a first double-double for Jeremy Sochan with 16 points and 11 rebounds in a first start as Baylor moved to 12-0 with a 104-68 win having opened the month with nine points and 10 rebounds after netting 12 points. Shaquille Walters continued a scoring streak with 14 points against Colgate off the bench before netting 16 along with five assists in a start for Northeastern (6-7) in consecutive victories.

Mate Okros scored 12 points to start December with a win for Drexel (5-5) and also added 10 points during the month. Fellow Brit Amari Williams recorded five points and a season-high 12 rebounds in the aforementioned OT loss to Princeton before scoring a best of 12 points to go with seven rebounds in just 13 minutes to close 2021.

Josh Uduje had three games in double figures including a season-high of 14 points in just 17 minutes against Regent; earning a first start and posting 12 points in a 30-point win for Coastal Carolina (8-4). Kayne Henry finished with five double-digit scoring games out of seven in December with a season-high of 16 points in the final outing in 2021 for Jacksonville State (7-6) – adding eight rebounds in the 123-59 win over Carver.

Meanwhile, Ethan Price had three games with at least 10 points including scoring 12 along with nine rebounds and three steals for Eastern Washington (7-6) as they defeated Multnomah 95-56. Robinson Idehen had a run of scoring eight points in four of five games in December for UC Santa Barbara (7-5) with six points and seven rebounds in between in a 21-point victory.

Micheal Anumba fired in a season-high of 18 points without a miss in an 85-80 victory for Winthrop (7-6) against Furman before posting a best of nine rebounds in the next outing, while Michael Folarin matched a season-high of seven points to go with seven rebounds for Eastern Washington (7-6) and Gedi Juozapaitis had nine points for Georgia Southern (7-5) before scoring eight in a return to the starting lineup.

Freshman Cam Hildreth was back in double figures for Wake Forest (11-3) with 12 points and eight rebounds in a 77-70 win against VMI with Sam Alajiki earning a first start for Cal Berkeley (8-5) with a best of six points coming against Santa Clara.

Tariq Balogun had a best of 10 points in December in 17 minutes off the bench for Eastern Kentucky (8-6), while Harry Morrice started with double digits in scoring for the first time this season and repeated the 10-point outing for North Carolina A&T (5-9) a few games later to earn another spot in the starting lineup.

Josh Ogundele had his most productive game for Iowa with seven points and five rebounds in 16 minutes of action in a seven-point loss at Purdue with James Okonkwo scoring his first points in a debut appearance for West Virginia (11-1).

Alex Tew had a string of starts for Weber (10-4) with five points and five boards against BYU, while Daniel Ogoro netted a season-high of eight points to open December and repeated the feat two games later as part of Youngstown State (8-4) winning five of six games in the month

Also, Vasja Pandza hit two triples against Washington before netting a season-high of nine points for Seattle (9-4) against Northwest (WA) in a 100-68 victory and Jonathan Komagum had back-to-back games with six points and six rebounds in close defeats for Sacramento State (4-6).

Jelani Watson-Gayle has scored at least 13 points in every game for Fresno Pacific (7-4) so far this season – averaging 19.5 points per game heading into 2022. The graduate student fired in 34 points with eight threes against Chaminade – adding seven steals before closing the year with seven more triples in a 21-point outing with six rebounds and three assists albeit in two defeats.

Sesan Russell started December with 15 points and eight assists before adding 17 points in next outing, playing 40 minutes on both occasions for Florida Tech (9-3) in successive wins. Josh Mims netted 12 points in the loss at #5 Nova Southeastern, while Niall Harris hit double figures for the first time before finishing with 14 points and then season-highs with 15 points and nine rebounds in successive starts. Also, Sam Grant matched his season-high with nine points in an OT win over Notre Dame (OH)

Meanwhile, Josh Apple had 16 points and nine rebounds at Oklahoma Baptist then fired in career-high 23 points on 10-16 shooting and 10 rebounds with two threes in both games for East Central (4-7), while Nathaniel Powell matched a season-high of 11 points in a first start for UMN Crookston (4-6) and followed with back-to-back games with eight points.

Sean Trumper also equalled a season-high of 15 points on 7-of-10 shooting in an 87-86 win for Franklin Pierce (7-3) against Bentley (8-2) with Adria Amabilino Perez taking his scoring streak in double figures with 11 points at the start of the month.

Robin Bedford had a season-high of nine points to start the month for Newberry (6-6), while Chris Feeney scored first points with five for Flagler (9-2) amidst their strong start. Obi Agu had six points for Northeastern State (7-4) in growing time and Tomiwa Sulaiman also had a best of six points for IUP (10-1), whilst pulling down eight rebounds to close out the year.