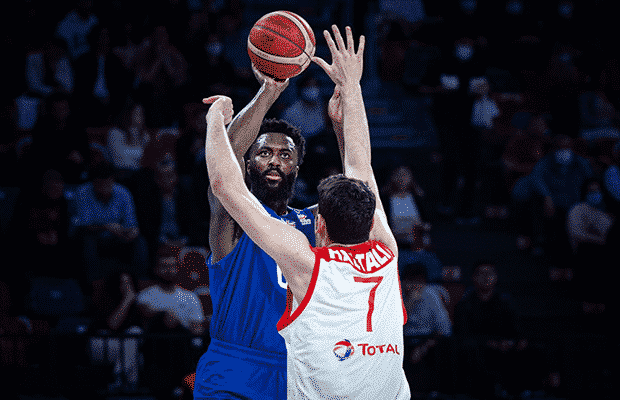 Great Britain were unable to capitalise on a fast start, ultimately going down 84-67 to Turkey on Sunday afternoon in Istanbul, Turkey.

Opening the game firing on all cylinders, GB led by as many as 13 before Turkey mounted their comeback, as Shane Larkin – one of the best guards in Europe – took over in the second half, as he finished with 22 points – 10 in the fourth quarter – and 8 assists.

“They deserved the win,” GB Head Coach Marc Steutel commented after the game.

“They played well for the majority of the game and dictated a lot of elements. I though they executed offensively against out ball screen coverage well in the first half and made some adjustments in the second half when we tried to react to what they were doing. I felt they continued to hurt us.

“I’m proud of the effort from my guys. We tried to do a lot of things well, bearing mind our game plan. It just felt like it was one of those nights that unfortunately the game ran away from us which we’re not too pleased about.”

Tarik Phillip had one of his best games in the GB jersey, finishing with 18 points and 7 assists, while Gabe Olaseni had 15 points and 9 rebounds, and Dan Clark had 17 points.

“They were able to control the game in the second half especially and with the experience on the court and the basketball IQ they have, they were able to take the game where they wanted to be,” Clark added.

“We were chasing the game at the end and it became difficult for us. But I’m proud of the guys.”

GB couldn’t have asked for a better start, sparked by Tarik Phillip, they led by as many as 13 points in the opening quarter with emphatic dunks from Gabe Olaseni and Dwayne Lautier-Ogunleye. A 6-0 run for Turkey to end the period saw them pull within 7, 23-16 after the opening period.

The 6-0 run soon turned to a 12-0 run as Turkey took the lead forcing Steutel into a timeout into the second. GB steadied the ship, tying it up at 37 at the halftime break.

A 7-0 run midway through the third saw punctuated by a Shane Larkin lay-up gave Turkey a 49-41 cushion, as their superior ball movement began to become apparent. The hosts opened up their first double digit lead on a Tuncer jumper in the lane with 2 minutes left in the third before Tarik Phillip knocked down back to back threes and assisted on a Dan Clark basket inside to pull the lead down to six heading into the fourth.

An 8-2 Turkey run to open the fourth set the tone as Larkin continued to make his mark on the contest, the lead ballooned to as many as 19 and from there Turkey would cruise on to the win.