GB beaten on the road by Estonia, finish first window 0-2 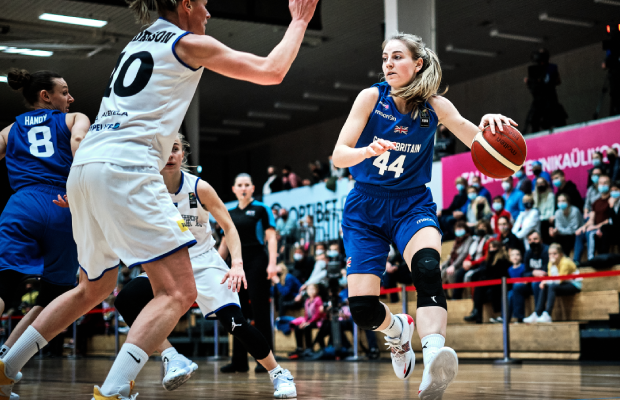 GB Senior Women suffered a disappointing 72-69 defeat away at Estonia in a major blow to their EuroBasket 2023 hopes, on Sunday afternoon.

Chema Buceta’ side needed a response after falling to a home loss against Greece in their group opener, but came up short once again with a costly defeat in Tallinn to drop to 0-2 in the qualifiers.

Azania Stewart led from the front with a battling display under the basket in a 103rd cap; finishing with another double-double of 17 points and 12 rebounds in a physical encounter, while Holly Winterburn had 14 points, six rebounds and four steals.

Karlie Samuelson felt the full force of that physicality with an early injury scare two minutes into the game, compounded by a hard fall on the stroke of half-time and did not return after the break.

The home side had settled the quicker of the two teams, though Stewart scored seven of GB’s first nine points as they tied the game. Estonia re-established a five-point lead at 19-14, but Samuelson would hit the visitors’ first triple to level the scores after 10 minutes in a 5-0 close.

Stewart continued to find success inside alongside Cheridene Green and soon moved into double figures. Estonia had used a 7-0 run to take a 28-25 advantage, but Chantelle Handy sparked a 12-2 burst with a run of eight consecutive points and GB would lead 35-41 at the half-time break.

.@chan2211 heats up with a quick 6 points in 40 seconds for @gbbasketball! 🔥🇬🇧🏀 pic.twitter.com/jfxbJrwOl4

Any hope of carrying the momentum into the second half and pulling away was dashed by another strong start from Estonia as they found their outside shooting to narrow the gap. GB’s offence stalled and they were held to just 10 points in the third with the game level at 51-51 heading into the fourth.

All of a sudden, the home side were in the ascendancy as they started with a 5-0 run to open the final quarter and GB were left playing catch up. Another big triple made it 64-57 with less than five minutes left on the clock.

Winterburn answered with the next five points before another Estonia three came as a dagger. Still, GB refused to give in and halved a six-point deficit with an astonishing three at the buzzer from Winterburn to set up a tense final minute.

But despite a vital stop giving GB a chance to take the lead with 12.1 seconds to go, a controversial no-call was followed by an unsportsmanlike to give Estonia a chance to close out the win.

They went two of four from the line to offer GB a lifeline, but a turnover out of bounds effectively ended the contest.