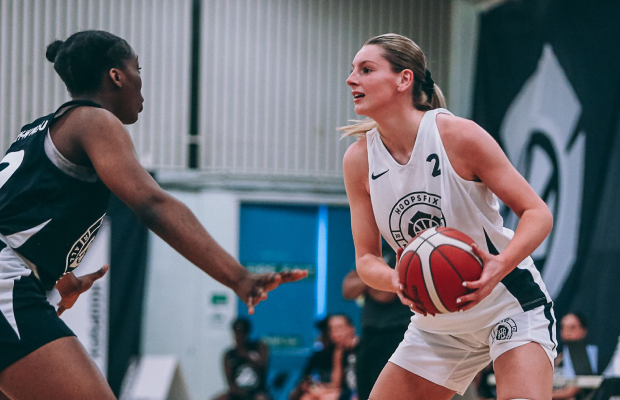 Team White led from start to finish as they claimed a 81-76 victory in the Under-19 Women’s game at the Hoopsfix All-Star Classic at the Battersea Sports Centre, on Saturday.

Cameron Taylor-Willis led the way with 17 points, 10 rebounds, three assists and three steals with Molly James adding 13 points in the win in London, but they had to repel a late fightback having led by as many as 19 points in the contest.

Team Black were paced by a 18-point, 17-rebound double-double from Isi Ozzy-Momodu as they closed the gap to three points inside the final minute.

Abbey Whitehouse opened the scoring in the second women’s game at the Hoopsfix All-Star Classic with Ozzy-Momodu responding to get Team Black off the mark. After a cagey start for both sides, Taylor-Willis began to take over with back-to-back triples amongst a 13-2 run.

Asha Andrews beat the buzzer with a nice move to reduce the arrears back into single figures and Ozzy-Momodu had consecutive scores at the start of the second to edge her side closer.

However, Team White made their move to stretch their advantage. First, through Henshaw who scored six points in quick succession. And, then again from Taylor-Willis with back-to-back blocks and rebounds at both ends with Ella Doherty knocking down a three to help extend the gap to 18 points at the half.

Ines Goryanova – the youngest participant in the game – opened the second half with a score from beyond the arc to spark a 7-2 start for Team Black as they began to whittle away at the deficit. They fuelled their comeback chances on the defensive end by keeping their opponents quiet in the third until Taylor-Willis stepped up with back-to-back threes to re-establish control to make it a 19-point game.

Ozzy-Momodu continued to work away on the glass, scoring inside to bring up a double-double with Team Black heading into the fourth quarter trailing by 14 points at 43-57. The CoLA forward continued to be the focal scoring point for her side, while James ensured Team White stayed in the ascendancy.

Three-point plays from Goryanova and Katie Januszewska provided late impetus at the halfway mark in the fourth and Team Black rode the momentum in a 14-4 burst to close the gap to five at 67-72 ahead of the final two minutes with Mariam Olawoyin making plays at both ends of the floor.

All of a sudden it was a one-point and Team Black had chances to draw level before Molly Lavin’s tough finish would all but ice the game with 16.2 seconds left on the clock with Anna Nevison and Whitehouse holding steady at the line to knock down a pair of free throws each.