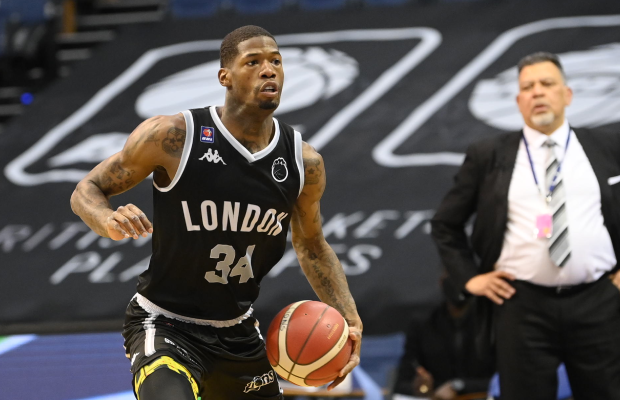 Leicester Riders and London Lions both advanced to the semi-finals with second-leg victories in Worcester, on Wednesday evening.

The Riders were already up 29 after Monday’s emphatic win, while London backed up their opening win to go through in dominant fashion.

Here’s a recap of the second legs of the first two quarter-final ties:

Leicester advanced to the semi-finals with minimal fuss as they secured a 92-79 second-leg win to wrap up a 177-135 success on aggregate. Six players were in double figures, led by William Lee’s 17 points as the league champions were able to go through their roster.

The Flyers made the brighter start as Ben Mockford scored eight of his 17 points in a 15-9 opening. Leicester had cut the gap to two points after 10 minutes before pouring in 30 points in the second as they raced towards an eight-point advantage at the break, up 49-41.

The overall deficit was above 35 at this point and the game was a little flat as a result. Bristol kept pace with their opponents in a 24-24 third period, but were outscored in the fourth as Mo Walker and Jamell Anderson finished with a flourish for the Riders.

“I thought we did a good job,” said Rob Paternostro in the post-game interview on Sky Sports. “Always weird with these leads like that, always feels strange on the sidelines. The points were spread and the good thing is we didn’t have to play a lot of guys a lot of minutes.”

London ensured they did not spurn another big lead as they eased to a 95-60 victory to overcome Cheshire. Vince Macaulay’s side started strong to set the tone as they moved into the semi-finals with a 168-126 aggregate triumph.

The Lions raced out of the blocks with early triples from DeAndre Liggins and Justin Robinson – recovered from an injury in the first leg – in a 7-0 opening that soon transpired into a double-digit cushion.

Matthew Bryan-Amaning came off the bench to score nine points in seven minutes, but when Dirk Williams hit a corner three to beat the first quarter buzzer, the Nix were being doubled up on the scoreboard at 30-15.

MBA hit a second three at the start of the second, but the outside barrage kept coming from the Lions with Joe Ikhinmwin firing in a trio of triples. Shane Walker then twice joined in on the act in an eight-point cameo with London 13-of-21 from three-point range in leading 60-31.

There was no let up as the lead continued to grow with the Trophy winners running riot with a 24-9 third period. The final quarter could have not been further away from the dramatic finale of the first leg with London missing out on the century with 11 points in the fourth.

The two remaining semi-finalists will be decided with the remaining second legs taking place tomorrow.