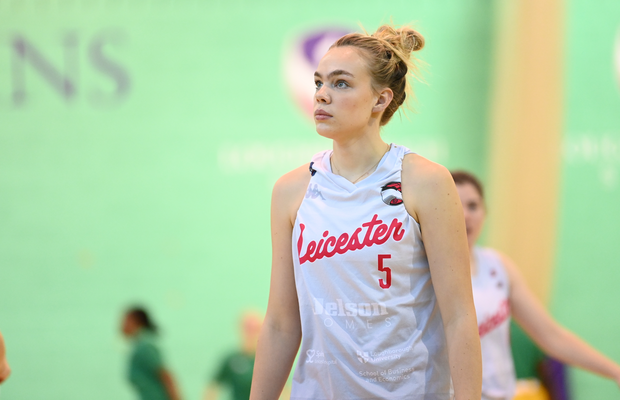 Holly Winterburn returned to Leicester Riders in the summer with the goal of bringing more success to the club.

10 games into the season, and the Riders remain perfect in all competitions with their biggest test lying in wait on Friday night as they battle Sevenoaks Suns – also still unbeaten – for the WBBL Cup title.

I honestly could not be happier to be back home. So excited for this opportunity to push basketball in Great Britain to the next level. Thank you to @RidersWomen @lborobasketball for making everything possible! Time to work📍🇬🇧

Winterburn’s last encounter with Sevenoaks was the 60-55 defeat in the 2019 WBBL playoffs final in what was her final game prior to departing to the States. And, the 20-year-old guard is relishing the chance to rekindle the rivalry on the big stage.

“It’s always great to play Sevenoaks because it’s just a huge test mentally and physically,” she told Hoopsfix. “You have to be focused for the full 40 minutes and execute the game plan perfectly.

“It’s a great advert for the game to have such a high level game on Sky Sports so I’m really looking forward to it.”

Winterburn has been thriving upon her return to the Riders with averages of 11.5 points, 10.5 rebounds and 7.3 assists per game through the Cup campaign, after a year at the University of Oregon.

The two-time WBBL Young Player of the Year started the season with back-to-back double-doubles before closing out the group phase with 18 points, nine rebounds and eight assists in a third successive win.

“It definitely feels like a completely new situation for me,” she said of her return. “I’ve taken on a different role of being more of a lead guard and playmaker, which I’ve actually really enjoyed and feel more effective on the court.

“I don’t feel any pressure or responsibility as my teammates around me are so talented that I can rely on them if I’m struggling.”

The strength in depth is a key factor to the Riders’ success – as is their stifling defence. In the four games of their Cup run, only Newcastle Eagles scored more than 50 points, while Jesper Sundberg’s side have only conceded 251 points in five league games so far.

GB Senior Women’s head coach Chema Buceta had praise for Winterburn in the recent MVPCast, but emphasised the importance of defence on his teams – suggesting improvements are needed in that area for the rising star, amid calls for a long-awaited call-up.

“I definitely need to be better personally on defence,” admitted Winterburn, who was the MVP in the inaugural Under-19 Women’s game at the 2019 Hoopsfix All-Star Classic. “In particular, being more disciplined off the ball.

“Coach Jesper has really forced us to be accountable and work hard every day on defence. There’s just simply no excuse for not sticking to our principles and getting the job done.”

It’s been over two months since Leicester brushed aside Cardiff Met Archers in a 40-point semi-final victory, but the preparation goes back to the summer for the Riders in search of more silverware.

“We’ve been in the gym since August,” Winterburn concludes. “It’s been an absolute grind every day to just get to this point and winning the title will be a way of rewarding all that hard work.

“I know everyone is super excited and we will be ready when tip-off comes.

“I think the key to us winning is just sticking to our game plan every single possession for the 40 minutes.

“We know what we need to do and I’m confident that if we play our best on both sides of the court, we will get the win.”

Check out Episode 68 of the Hoopsfix Podcast below, as Winterburn previously discussed her return to the Riders: