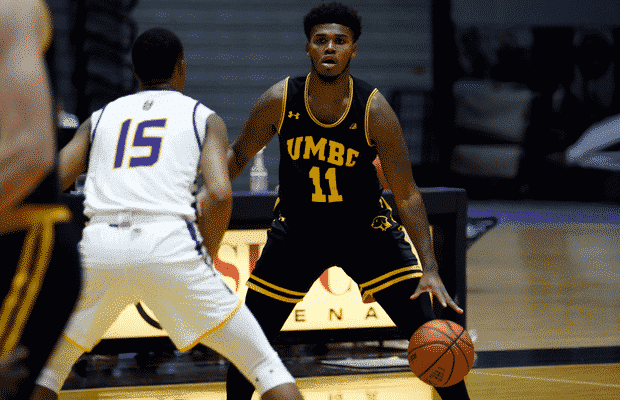 Here’s our first look at how the leading Brits are getting on in the States with the disrupted 2020-21 college season underway.

Brit duo RJ Eytle-Rock and Dan Akin have been excelling together at UMBC (7-2) with impressive performances for the Retrievers. Akin posted a career-high of 19 points off the bench in a win against George Washington with Eytle-Rock adding 18 points as they combined for 13-15 shooting from the floor.

Eytle-Rock has hit double figures on five occasions in total; closing out 2020 with a 19-point haul in a loss to Binghampton, while senior forward Akin had 16 points in a win over Delaware – earning America East Player of the Week honours.

Another Brit duo have hit the ground running with Amin Adamu averaging 14.0 points per game in four games on the road for Montana State (2-3) with Jubrile Belo also putting up double figures in scoring. Adamu started with 14 points and six assists with a best of 17 points, while Belo netted 20 points without a miss in a 114-74 victory.

Shaquille Walters finished with 12 points, nine rebounds, three assists and three steals in his second appearance for Northeastern (1-5) in their only win so far. The redshirt junior scored a season-high of 17 points at Old Dominion and is averaging 8.8 points and 7.0 rebounds per game through December.

Senior forward Kayne Henry had a solid start to the season with Jacksonville State (7-2) before enjoying a double-header against Tennessee State in the OVC. An 11-point outing was the first in double figures and followed by a season-high 17 points on 6-of-8 shooting in 17 minutes.

Caleb Fuller posted 12 points off the bench against Idaho State to help UC Davis (2-2) to their first win in late November before a 13-point display – without a miss – came in a second consecutive victory.

Mate Okros has been a regular starter for Drexel (5-2) and had a best of 14 points against Coppin State whilst also handing out four assists on two occasions having combined with former Myerscough team-mate Amari Williams, who had five points against Quinnipac in a highlight of his freshman year.

Freshman Vasja Pandza was inserted into the Seattle (6-5) starting lineup midway through December and had a best of 13 points in a 78-54 win, followed up with seven points in a five-point loss to Cal, while fellow newcomer Nate Robinson scored his first points in his junior year with three points against UCLA.

Sophomore centre Harry Morrice posted a career-high for North Carolina A&T (3-9) with 13 points in 17 minutes against Ohio off the bench with his next double figure display coming against Stanford with 10 points – resulting in another run of starts.

Stony Brook junior Leighton Elliott-Sewell had a best of eight points in a dominant win against Point Park before finishing with seven points, four rebounds and two steals in a 73-58 victory with his side perfect from four games in Conference play.

Robinson Idehen collected 11 rebounds to go with four points in a win to start his senior year at UC Santa Barbara (4-3) before getting the start in the next game and tying his career-high with 21 points on 10-of-11 shooting along with eight boards in a 123-52 success.

Hosana Kitenge had six rebounds, three assists and two blocks in just seven minutes in his most productive outing for Coastal Carolina (6-1), while Michael Anumba hit double figures for the first time this season with 11 points in the penultimate game of 2020 with unbeaten Winthrop (7-0).

Jonathan Komagum had a combined 15 rebounds in his first two games to earn a run of starts through December for Toledo (7-3) with a best of 10 boards coming against Cleveland State. Freshman Eduardo Andre opened his season with nine points and two blocks in 14 minutes for Nebraska (4-6) in a 110-64 victory over Doane.

There has been limited action across Division 2 with a handful of Brits starting their campaigns in December with seasons either delayed until January, or cancelled.

Eisley Swaine netted seven points in his first appearance for Findlay (4-0) as they recorded a 97-65 win, while Callan Low had six points in 17 minutes for Newberry (2-2) in an exhibition loss at Western Carolina.

Junior Obi Agu posted six points and eight rebounds as a starter for Northeastern State (1-6) before coming up with nine points, three rebounds and two assists in 28 minutes off the bench in his side’s only win. Agu has also scored 11 points on two occasions – the second of which was upon a return to the starting lineup.