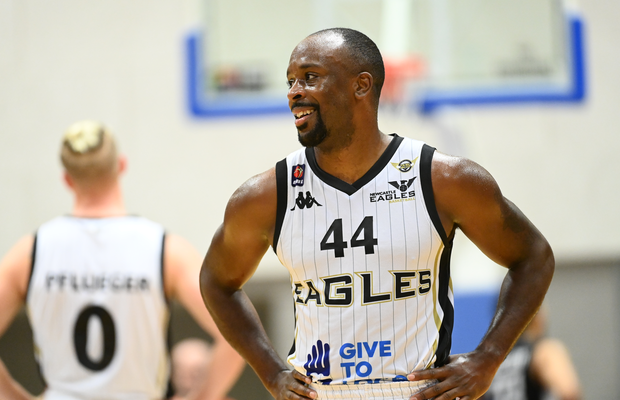 The BBL Championship standings seems to be taking early shape as the top three sides all continued their recent momentum.

Leicester Riders, Newcastle Eagles and London Lions all advanced to the semi-finals of the BBL Cup as well, alongside Manchester Giants on another busy week of action.

The Riders enjoyed two home wins this week as they advanced to the semi-finals of the Cup and maintained their unbeaten start in the league, brushing aside both Glasgow and Bristol with minimal fuss.

Corey Johnson top scored with 20 points in the 93-59 Cup success before Rob Paternostro’s side jumped out to a 34-19 start live on Sky Sports on their way to a 12-point win over the Flyers with Geno Crandall leading the way with 19 points, five rebounds and eight assists.

Having seen London and Newcastle leapfrog them in the standings at the weekend, the Riders can re-claim the #1 spot for Christmas as they host Bristol in another clash between the two, on Wednesday.

Newcastle will have a Cup semi-final clash with the Riders to look forward to, and they came through a busy week with three wins in the space of five days in climbing to the league summit, whilst beating Bristol by eight in the Cup.

The Eagles used a strong second quarter to gain control against Worcester with Evan Maxwell finishing with 21 points and 12 rebounds in a 13-point win. They were pushed all the way on the road against Cheshire with a pair of late free throws from Justin Gordon – who had a team-high 22 points – proving decisive to clinch a one-point victory to take them to 4-1.

The Lions are really starting to roll. They had to work hard for their five-point Cup win away at Plymouth before contrasting home wins over Manchester and Worcester to move to 4-1 for a share of the lead at the top of the BBL Championship.

Dirk Williams caught fire to haul the Lions back from 17 down against the Giants with nine threes in a 37-point haul as they eventually won 92-88. The former Sharks wing then scored 22 points in a dominant 32-point win against the Wolves on Monday night with London putting on a show with 60 points in the first half to wrap up 2020 in style with Orlando Parker impressing for 25 points and Justin Robinson adding 21.

The Lions’ strength in depth is already showing as they were without Fahro Alihodzic this week, while Robinson missed the Manchester encounter and Liggins was absent for Monday’s victory.

Into the top four in our rankings they go. The Giants have been one of the stories of the season with their improved success and they are backing up their results from the Cup, whilst advancing to the last four after edging out Surrey, 87-84.

Danny Byrne’s side made the trip to the English capital on Friday night and raced into a 19-34 advantage after 10 minutes and had three players score 20+ points, though they would fall to a four-point loss. On Sunday, they poured in 31 second quarter points on their way to beating Plymouth by nine as Lyle Hexom and Jordan Whelan combined for 54 points in the win to level up their league record.

Not long ago, the Raiders were top of the rankings having won seven of their opening eight games in all competitions. It’s now been four straight defeats for Paul James’ side since as they still await the coveted debut of Andrew Lawrence.

Plymouth bowed out of the Cup at the hands of London last Wednesday, unable to avenge their recent league defeat, despite 27 points from Ashley Hamilton in the five-point loss. They dropped to 2-3 in the league as they were beaten by Manchester on the road without American Chris Porter-Bunton.

They face familiar opponents in Worcester to finish the calendar year in a bid to return to winning ways at the Pavilions.

Just the one game for the Sharks this past week, but it was another win as they moved to 3-2 in the league to move into the top four. After a challenging Cup campaign in the ‘Group of Death’, Atiba Lyons’ side have started finding their groove – with the in-season pick-up of Jeremy Hemsley continuing to look a great move.

The American scored 23 points to help Sheffield pull away from Glasgow in their 18-point road win, while Nicholas Lewis went on a late scoring run to finish with a game-high of 32 on 11-of-14 shooting. The Sharks will be back in action at the start of 2021 when they host Plymouth.

The Flyers’ Cup run was ended this past week, on the road in the North-East, but they did find success on their travels with an impressive 20-point win in Surrey to move to .500 after a loss to Leicester on Sky Sports.

Bristol were within single figures of Newcastle in their quarter-final clash, but it was a strong finish that narrowed the losing margin. They were down 34-19 against Leicester early on in a 12-point loss, but put their game together against the Scorchers with Teddy Okereafor leading the way with 16 points, eight rebounds and 12 assists as they pulled away for a convincing victory.

Another trip to the Morningside Arena to take on Leicester closes out their 2020, on Wednesday evening.

It was always going to be a difficult weekend for the Wolves – still without their Americans – and they suffered back-to-back defeats on the road to Newcastle and London with heavy minutes logged from their star players.

Matthew Bryan-Amaning and Jordan Williams both played the full 40 minutes as the Wolves went down by 13 points against the Eagles before they were blown away at the Copper Box – conceding 60 points in the first half as their opponents ran riot with MBA posting a second double-double.

The schedule shows no sign of relenting for Matt Newby’s side as they host Surrey on Monday before a trip to face Plymouth two days later to close out the calendar year.

The Rocks have teased the signings of two Americans to bolster their roster after they complete their period of isolation, and will be hoping they make the difference. There has been enough signs of encouragement from this predominantly young roster, but have also had a number of tough outings.

It was a difficult weekend with a 34-point loss on the road in the Cup against Leicester before falling to an 18-point loss at home to Sheffield. Isa Brandon top scored with 21 points as their opponents pulled clear in the third. They welcome the Eagles in the coming weekend in their final game of 2020.

Not the follow up the Scorchers would have hoped for after beating Cheshire last week. A spirited display saw them come up short in the Cup before a disappointing 20-point loss at home to Bristol in the league.

Surrey had led by 13 after the opening quarter, but found themselves chasing the game late on against the Giants and fell to a three-point loss with Martelle McLemore netting 21 points. On Sunday, they were comfortably beaten after a slow start and they head back on the road next Monday to face Worcester.

Another defeat for the Phoenix this weekend, but it could so easily have been a much-needed second win. They had the ball in the final seconds against Newcastle, though their final play was not executed how they would have planned and ended up crucially turning the ball over.

Jimbo Lull had another standout game with 30 points and 11 rebounds as the hosts twice recovered from a double-digit deficit. If you take Lull out of the equation then Cheshire were 2-of-21 from 3-point range. Bottom of the league, but a chance to end 2020 on a high if they can pull off a derby win away at Manchester.