Why now was the perfect time for GB to unleash Holly Winterburn in the Senior side - Hoopsfix.com 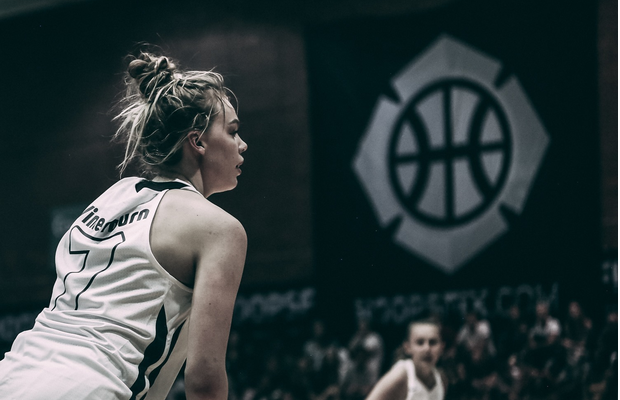 When we [all two of us at Hoopsfix HQ] heard that Holly Winterburn was returning to play in the WBBL this season, one of the first thoughts turned to her availability for the GB Senior Women.

Things, for various reasons, did not work out as hoped with NCAA DI powerhouse Oregon and Winterburn had also intended to transfer to UC Davis before deciding to come back home to the UK.

The recently turned 20-year-old has been a standout performer at every age group at national level having twice been named to FIBA’s All-Tournament Team with GB Under-18s and more recently, GB Under-20s in 2019.

The natural progression is to step up to the Senior side and this month’s qualifier felt like the perfect time to do so, given that Winterburn could not previously compete due to the in-season windows. Holes to be filled

Even with everyone fit and available, there was still a strong case to be made for Winterburn and an expectation she would receive her long-awaited first call-up. And then a 13-player squad was announced on Saturday morning with three starters absent, which made it even harder to believe that Winterburn’s name was not on the list.

Calling Winterburn the successor to Jo Leedham-Warner is still some claim at this stage, but there is no questioning that the Northampton native is one of the most exciting talents to emerge from this country in recent history.

Injuries to Rachael Vanderwal (knee) and Karlie Samuelson (ankle) left gaps in the back-court, while with Leedham expecting a baby in early 2021, GB were also missing a player that will go down as one of the greatest ever in British Basketball history.

There has been suggestions of keeping the winning formula going given the recent success and long-term cohesion of the roster, though the likes of Samuelson and Cheridene Green have come into the fold and made immediate impacts and the same will be hoped of with Kristine Anigwe – who was battling an injury during the Olympic qualifiers.

GB’s heavy defeat to Belarus on home soil almost a year ago has left them facing an uphill battle to return to another Women’s EuroBasket, but two wins give you a real shot so there’s probably not the willingness to experiment with the next generation as if you were heading in out of contention.

However, bringing in Winterburn is far from a stab in the dark. You know – or should know – the talent she possesses.

Going back to the current group, it really should not be overstated how incredible GB’s core have been over countless summers with Stef Collins, Chantelle Handy, Rachael Vanderwal, Jo Leedham, Temi Fagbenle, amongst others, all displaying unwavering dedication, even in the face of difficulties.

Unfortunately, they won’t be around forever. The next generation of players need to step in and you feel it needs to be a gradual integration as opposed to being in a situation where you have to blood several newcomers all at once.

Without going into great detail, you’re looking at Savannah Wilkinson coming back into the fold then the likes of Hannah Jump, Loren Christie, Ire Ozzy-Momodu to name a few potentially amongst the next line of Senior players, while Esther Little’s development is going to be fascinating to watch, particularly in 2021 at Gonzaga.

Chema Buceta has done this before in his reign as head coach, so this is not a more widespread issue. Wilkinson was given a chance with the Senior side back in 2016, while Kyla Nelson, Georgia Gayle and Gabby Nikitinaite – three more of his former Under-20 charges – were also handed a shot in camp.

Also, having the chance to learn first-hand from such inspirational leaders – on-and-off the court – from the players in the current squad would only further benefit someone like Winterburn.

The popular phrase rings true here. The best example in recent history is Lithuania’s Juste Jocyte. Soon to be just 15 years of age, the 2005-born sensation has already made her Senior Women’s debut for her National side after stealing the spotlight at the Under-16 European Championships in the summer of 2019. It just proves that age should not be a barrier.

Winterburn has performed for the junior age groups and is also a two-time Young Player of the Year in the WBBL. And, that was not just through being a bright talent that showed glimpses throughout a campaign, that was by being the leading scorer on one of the top teams in the league.

Season averages of 15.9 points, 5.4 rebounds, 3.9 assists, 2.3 steals in the 2018-19 league campaign – coming off the bench in six of 18 appearances with a best of 29 points against Caledonia Pride. And, it’s worth remembering Winterburn made her WBBL league debut at the age of 15 with nearly 70 league games now under her belt.

It’s not just about scoring, but finding multiple ways to impact a game. Players that can make things happen are invaluable, especially if you do it on both ends of the floor. Jo Leedham has often been that player for GB. Winterburn is one of those players.

To some extent, there is also less pressure with the way the qualifiers will now operate in the selective ‘bubbles’. Home advantage has been lost for the majority of teams – though fans are unlikely in most cases anyway – and GB will head to Istanbul in a group that has no direct relevance to Turkey.

Making your Senior debut for your country is a big moment and of course, there’s still pressure, but you would think somewhat less than playing in front of a raucous crowd that provides an intimidating atmosphere for a player away from home, though some players rise to such an occasion.

And again, even so, Winterburn is no stranger to playing under pressure.

.@CharnwoodBball/@RidersWomen's @hollywinterburn shows out on her way to the inaugural #HASC19 Under-19 Women's Game MVP for her final game before heading to @OregonWBB! 🔥🇬🇧🏀 pic.twitter.com/GoCPsa0sR2

Of course, we don’t know the reasoning behind the selection process and the preparation that goes on behind the scenes, nor is this a slight at any other player.

Trying to look at it the other way, Winterburn is not the finished article; still inexperienced and coming off of a year with limited playing time at Oregon. Being back in the WBBL in familiar surroundings allows Winterburn to really get back into her groove and continue to elevate her game.

Also, having a chip on her shoulder might not be a bad thing when it comes to proving a point – though Winterburn has already expressed her desire to become a multiple-winning MVP in the league, if there was any doubt in her motivation.

But one thing that is concerning, is the lack of contact. Even if you don’t feel she’s ready, there ought to be some sort of discussion and encouragement in regards to the steps that are needed. Risking alienating one of your most exciting players of the future, to the point where they may become disinterested, does feel like a major issue.

Speaking on Episode 68 of the Hoopsfix Podcast back in August, one of the topics of conversation between Sam (Neter) and Holly was the GB Senior side to which this particular quote stands out:

“No shade or anything on GB basketball, but I’ve heard zero from them over the past few years regarding why I wouldn’t get a call-up or what I need to do to get a call-up,” said Winterburn.

“Seeing some of the players that got picked and I didn’t, I found that really discouraging because I didn’t know why.

Holly Winterburn can become the face of GB basketball if given the opportunity. The future is bright and the future should be as soon as possible, before it becomes too late.