Green: We took over the game and were unstoppable at that point - Hoopsfix.com

Support
Home / National Teams / Green: We took over the game and were unstoppable at that point

Green: We took over the game and were unstoppable at that point 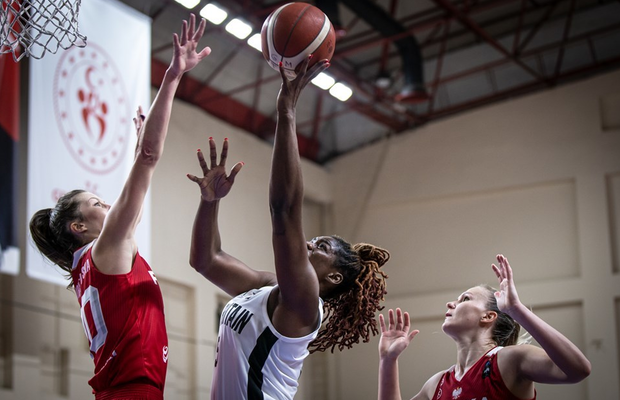 GB trailed 10-15 after the opening quarter, but a red-hot second quarter led by Chantelle Handy’s three-point blitz combined with lockdown defence at the other end resulted in a dominant 77-49 triumph as the Women’s EuroBasket Qualifiers resumed.

“We knew they were going to come out fighting and they were very aggressive with us,” Green told Hoopsfix.

“We just had to keep our composure, play our game and not play how they wanted to us to play, which is why we took over the game and played to our strengths – we were unstoppable at that point.

“[Representing GB] felt great as usual, it was just a little different because we was missing some teammates.”

GB had to deal with key absences of Jo Leedham-Warner, Karlie Samuelson and Rachael Vanderwal as well as being in a ‘bubble’ in Istanbul instead of having their scheduled home advantage.

“The environment of where we was staying made the bubble a lot more easier to cope with,” said Green. “We had our own space and a lot of time to recoup and rest our bodies.

“It wasn’t that different because we didn’t have many, if not any fans in the gym which is similar to the normal preparations on game day with my club team.”

Green made her GB Senior debut in the summer of 2019 and made an instant impact, playing an important role off the bench during the historic Women’s EuroBasket run in Riga/Belgrade, whilst epitomising the character of the side with relentless commitment and hustle.

The 25-year-old finished with 10 points, three rebounds, two assists and a block in Saturday’s victory against Poland – a country in which she plays domestically having re-signed with Gorzow.

“I think having one year of playing professionally helps with my role for this season,” she added. “I understand the style of play and exactly what is expected, whereas last year I was adapting to the culture that was created and now I feel like I’m apart of it.

Green is currently averaging 13.0 points, 8.3 rebounds and 3.3 assists per game on the 2020-21 campaign and has fast become an important part of the GB front-court alongside Temi Fagbenle – and now Kristine Anigwe.