Joshua Guddemi looking to give back on return to Derby Trailblazers - Hoopsfix.com

Joshua Guddemi looking to give back on return to Derby Trailblazers 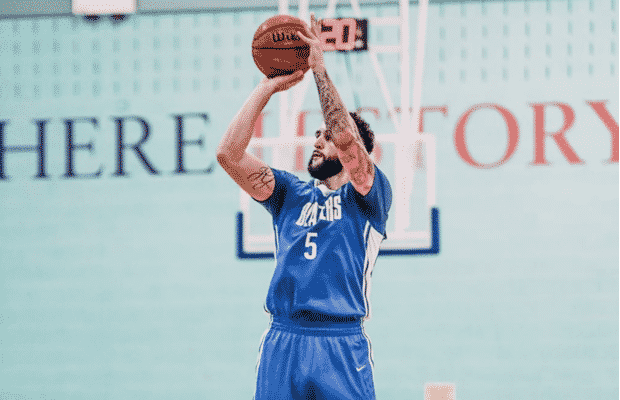 Joshua Guddemi has re-joined Derby Trailblazers for the upcoming 2020-21 campaign after almost a decade of playing overseas.

The 26-year-old forward averaged 21.1 points per game in Italy’s fourth tier last season, ranking amongst the top five scorers in the league having previously spent four seasons in Germany.

And, Guddemi believes now is the right time to return to the club and reunite with former coaches as well as the likes of Rema Lascelles and Oli Stanley on the court, once more.

“My intention has always been to come back and play in England somewhat later in my career,” he told Hoopsfix.

“After playing abroad for 8 years and the uncertainty around corona, I felt like it was a good time to return home and be closer to family and friends.

“Derby Trailblazers has been a club that has played a huge part in my basketball development and career, where I spent my youth and college days playing for the D1 and Academy team.

“Being back at the club it feels very nostalgic as I’m playing under the same coaching staff (Matt Shaw, Paul Bowen) as I played for previously and with a couple players who I’ve played with before.

“I want my decision to play for Derby to be an example for youth players who want to play abroad/professionally to show that they can continue their career back in the UK and also give back to the club who gave me many opportunities.”

Guddemi left Derby as a teenager to head to the States, where he spent four years at NCAA DII school New Haven and admits that it was a challenging experience in having to deal with managing his workload as a student-athlete.

“All the players are on a scholarship and can play, so you have to earn your spot on the team. For me, this was becoming a strong role player and using my play making abilities at the 4.

He added: “Once I signed professionally in Germany, the transition was very different. Signing as a pro, I soon realised that I needed to do much more.

As a professional, your responsibilities are far greater as most teams rely on you for more than just what you’re good at.

“This forced me to get in the gym/court a lot more to work on whatever I could to help the team. After three years in Germany, I developed into a more all-round player which helped me sign in Italy and I played my best season yet, averaging 21 points & 11 rebounds.

“From America to Germany to Italy, you can argue the basketball playing style is different but for me, basketball is basketball. If you can compete you can play anywhere.”

Guddemi also highlights the contrast in being a student-athlete and being a pro overseas in terms of off-court time with the need to keep busy.

“Whilst in America, you have your off court time sorted with studying, classes and uni social life, but as a professional you have a LOT of free time. This is something many players who haven’t experienced it do not realise.

“It may seem like a good thing but if you don’t stay busy or find a past time, it can be very mentally draining. For myself, I had to learn to switch off from thinking about basketball 24/7 – if we had a bad game it would affect me negatively as I had so much free time to think about it.

“I taught myself how to cut hair, started reading, journaling and took advantage of being abroad by visiting new cities.”

Guddemi hopes to bring success to Derby this season, whilst being able to pass on his experiences to the team’s younger group.

The Trailblazers have retained young British prospects Blake Bowman and Charlie Brown with Luke Ptak returning to the club after playing in the US.

“For me, my personal goal is to help Derby win the league and more so now, is to help develop the younger players and share some of my knowledge I have learnt whilst being abroad,” he concluded. “I know that this coincides with our team goal also to win the league.”

There is still uncertainty regarding the upcoming 2020-21 season following the latest government guidelines. Read more HERE.