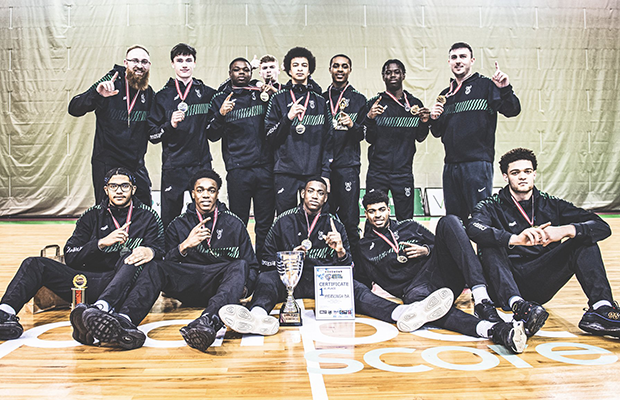 Neal Hopkins’ side took their winning run to 12 straight games as they finished 14-1 with a 68-43 victory over Tsmoki-Minsk in Stage III, having also won Stage II of the competition and will now head back to the SuperFinal – featuring the top four finishers of the 16-team league.

CALL US WHAT WE ARE.

“The EYBL has given us an experience we’ve not been able to get in the United Kingdom,” said Myerscough head coach Neal Hopkins. “The 33 games we’ve played in this competition, including the SuperFinal last year, has all amounted to where we are now.

“You have to give a lot of credit to the guys, particularly the ones we’ve returned. Bradley [Kaboza] and Amari [Williams] have grown throughout the process and it’s been a pleasure to watch. It’s nice to win and be a coach in that position but it’s more important to see these guys develop and become the team they are.”

Poured my life into basketball for as long as I can remember to earn a moment like this! @My_bball thank you! #EuropeanChamps https://t.co/fBPtyIok16

Myerscough are looking to best their overall fourth-place SuperFinal finish last season in the under-20 competition staged over three weekends, as they are led by Bradley Kaboza as he picked up his second EYBL Stage MVP.

The 6-foot-2 Londoner ranked second overall in scoring in Valmiera with 17.0 points per game and he matched this season’s best individual performance with an EYBL career-high 31 points against BS DSN (Riga, Latvia).

“This team is special,” said Kaboza. “We’re not phased by anything — if we’re down, up or in a close game — that goes from the coach down to the last man on the bench and that’s something you don’t find in every team. That makes us effective and I’m lucky to be playing with these guys.”

#MySco's @BradleyKaboza1 collected his second-straight #EYBL Stage MVP award after leading the team to a 5-0 record in Valmiera, a return to the SuperFinal and a regular season championship.

The lone loss this season – a 56-49 defeat to Keila BS (Estonia) at Stage I back in September – led to a run of 12 consecutive wins, including 10 coming by double-digits.

Myerscough has had two representatives in EYBL All-Star Five this season. Mikey Irvine and Lewis McGlasson both received the honour following Stage I and II, respectively.

Franklin Agu was voted by the opposition coaches as Myerscough’s Best Player following his performance at Stage III, where he reached double figures scoring in three games and ranked third in rebounding.

Four of Myerscough’s 2019-20 EYBL roster competed at the 2019 edition of the Hoopsfix All-Star Classic with Amari Williams, Lewis McGlasson, Sanmi Fajana and Bradley Kaboza all playing for Team Black in the Underclassmen game.

Elsewhere in the EYBL, Haringey Hawks are currently 8-0 after Stage II in the CE Region, a separate U20 Division competition, led by Alex Distras’ 28.3ppg.