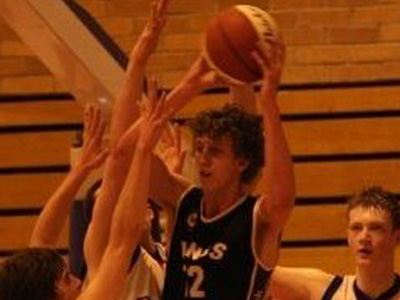 Esther Little has a bright future ahead of her – even if she might not fully believe it herself.

A super-talented, level-headed 18-year-old who has had to deal with incredible tests of toughness at a young age and yet, has still managed to excel on-and-off the court.

Little first discovered basketball at school after being noticed by her P.E teacher, owing to her growing height and would go on to make the county team in Suffolk before trialling with Ipswich. Fast-forward to four consecutive summers representing her country at international level and Little has already given a glimpse into her promising future as one of the leading British prospects of her generation.

“I’ve been really lucky,” Little began, when speaking to Hoopsfix. “I’ve been on every National team at every age-group which has been a blessing.

“The great potential people see in me, I don’t particularly see it myself, but I gain confidence through everyone believing in me.

If it wasn’t basketball, it could have been a number of other sports. Growing up in Ixworth, Little played netball at a high level and went far with swimming before ultimately having to come to a decision on where her focus would lie.

“I had a choice to make, but it was basketball that stood out,” she recalls. “It’s the team element for me. Everyone has your back and I love sharing moments with my ‘sisters’ – we’ve been through a lot together.”

Home is where the heart is

And, it’s that tight-knitted family atmosphere within the Ipswich Basketball Academy at Copleston that has allowed Little to find comfort.

“Nowhere can compare to Ipswich,” she declares with pride. “Obviously, I don’t know any different but it’s a special place that you only understand when you’ve been a part of it.

“From primary school, being inspired by the older generation and the senior teams always make time for the little ones.

Look at this amazing support from ⁦@CoplestonSchool⁩ ⁦@IBA_Copleston⁩ school pupils. This is elite sport, combined with total buy in from a school, working in partnership with a great club. Over 300 people watching #AllGirls in the ⁦@WEABL⁩ ⁦@bballengland⁩ pic.twitter.com/rmMXh3DasB

“Harriet Welham is a role model and team-mate – everyone knows her. She goes into primary schools coaching every week. Having someone that well-known with all her experience, it’s special for all the girls picking up a ball for the first time.

“Leaving is definitely going to be so hard for me. It feels like an escape, everything that goes on kind of goes away – it’s my happy place.”

That time will come as the American dream beckons with Little having attracted interest from colleges for some time. A decision on that next step is forthcoming with Little close to a commitment, though her immediate future remains in Ipswich after re-classifying to the Class of 2021.

“I want to wait to be ready to go,” she explains. “Making sure my well-being and mental health is right because I’m going to be leaving people who have supported me for so long.

“It’s also an extra year of getting better which I don’t see as a negative. I just have to do what is right for me.”

Copleston and Ipswich head coach Nick Drane has had a huge influence on Little during her time with the academy, and not just in regard to her rapid basketball development.

“Nick is the reason I play the way I do,” she says. “I never thought I would be able to shoot threes or run plays as a point guard, but Nick has always had that belief in me and seen what I can do.

“He’s very protective of us and knows us better than we know ourselves. More importantly, he invests in us as a person over a player and will always make sure we’re doing ok.”

“I want to keep developing and it also comes down to how hard I work – people say I’m the most competitive person they know.”

That competitive edge translates to all parts of life for Little and she has found a way to use defeats as fuel for motivation; contrasting her younger years of raw emotion.

Drane commented: “Esther is an amazing ambassador for the Ipswich programme. She has been in the spotlight as a young player in the female game since a very young age and has dealt with the pressure of being one of the games brightest talents incredibly well.

“I’ve coached her, almost every day for over five years now, and saying I’m proud doesn’t even begin to come close to how I would describe how I feel about her growth and development both on and off the court.” The duo had an unfamiliar experience last summer when they found themselves on opposing teams with Little making history as part of the first-ever Under-19 Women’s game at the Hoopsfix All-Star Classic.

Drane ultimately came out on top, leading Team White to victory in Brixton, though Little valued the significance of the game beyond the result.

“That was one of the best things women’s basketball has had in the UK,” she enthused. “Especially with it being on the same weekend as the boys game.

“People realising that the girls’ game can still be exciting, and it shouldn’t be overlooked because we can’t dunk or whatever.

“Sam Neter is appreciated by all of the girls more than he knows. We all know how much we can struggle to get seen and it really brought the girls’ community together.

“It’s all about inspiring the younger generation and for them seeing that many people watching can only be a good thing.”

Making good of a bad situation

The current campaign has certainly had its highs and lows. Little missed the first few months of the season after a stress fracture in her foot was discovered, before returning to action just prior to the new year.

Success was not far around the corner as Ipswich held off Reading Rockets to win the Under-18 Women’s National Cup in Essex, in February with Little contributing a double-double of 15 points and 13 rebounds.

just a bit of for you all .. but we frickinnn’ national champs bbyyy days like these make the endless hours, sweat, blood & HELLAAAAA tears all worth while‍♀️‍♀️‍♀️ but we aren’t finished yet i wouldn’t wanna live this moment with anyone else by my side, i love you all shoutout to everyone who came to support, we appreciate you all frrrr xxxxxxx

But even with the frustration of the earlier spell on the side-lines, Little managed to find light out of the situation.

“I try to be one of the leaders and being out for so long actually helped me personally.

“I feel my IQ has definitely improved. It allowed me to see how I can help the team and knowing when I was back, what I can do to help get the best out of everyone.

“I’ve had some really good games since I’ve been back, but also games where I feel I’ve not been so good.

“Getting 20 rebounds would be more important to me than scoring 20 points but stats are not my focus. I want to be there for my team, be the leader on the court and try to do all of the little things to help us win.”

Copleston have advanced to the WEABL Championship decider for the first time in the league’s history with previous winners City of London Academy standing in their way.

Adversity has not been lacking in the journey with a determined run in spite of numerous injuries along the way. They locked up the number two seed in the Southern Conference with a 7-1-2 record before making their way past Manchester Mystics and Barking Abbey in the playoffs.

“At the beginning of the season, if you told us we’d be in the final, we would have overlooked it,” Little admits.

“Everyone has had an injury at some point so to get through that just shows the resilience we have on the team.

“We’ve been with the academy since we were 14 years old – we know each other’s strengths and weaknesses and always fight for each other.”

Little was limited to just four games of the regular season, though still put up huge numbers – posting a triple-double against CoLA with overall averages of 15.5 points, 19.5 rebounds, 6.8 assists and 3.0 blocks per game on the season.

Note: The 2018-19 Southern Conference DPOY was not eligible for this season’s All-WEABL awards due to number of games played.

However, the 2001-born forward was quick to heap praise on her team-mates for their performances this season, particularly in her absence.

“My team-mates have improved so much in the time I was out. They stepped up, filled my minutes and it’s probably the best thing to have happened to the team, honestly.

“We wouldn’t be where we are without them – they are the reason, not me.

“I have even more trust in them now. Even in the (U18) Cup final when I was in foul trouble, I knew I didn’t need to worry.

“We just have to stick together because that’s when we play our best basketball.”

With all of Little’s accomplishments already achieved, this would bare extra meaning – such is the journey they have been on and the unique affiliation to the academy programme.

CoLA pose a stern challenge with Little and her team under no illusion to that fact and it will come down to executing on the day.

“It’s going to be a tough game against a well-drilled team. CoLA are probably the highest respected programme – Jackson (Gibbons) has created one of the best cultures.

“I believe we can win – Nick going to prepare us as best he can, already putting in lots of hours.

“It’s a big day with a big crowd and a lot of pressure, but those are the days we live for.

Little concludes: “This will be right up there if we win – to win with my girls by my side – that means more than the basketball side of things.”

Whatever happens, Little’s star will keep shining bright on the path to more success.