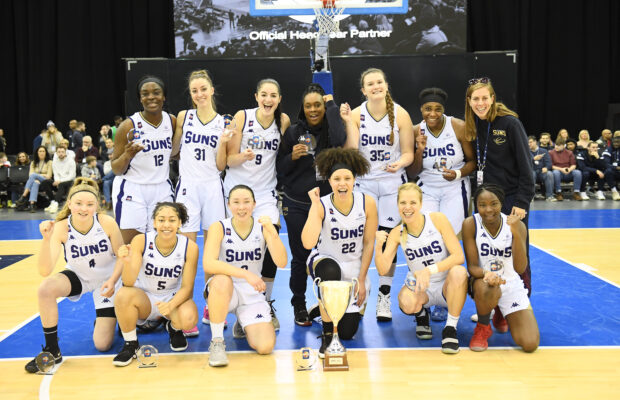 Sevenoaks Suns claimed their maiden WBBL Cup title with a 74-64 victory over Durham Palatinates in Sunday’s final, in Birmingham.

Len Busch’s side were runners-up 12 months ago in losing to Sheffield Hatters, but finally get their hands on the missing piece of silverware from their collection.

Janice Monakana was named MVP once again – having earned the honour at the Play-offs final last season – with an equal game-high 21 points, while Cat Carr finished with a near triple-double of 14 points, eight rebounds and 10 assists.

“We played together and especially when there was adversity as they threatened to come back near the end of the game,” said Monakana.

“We stuck together and played right until the buzzer. This makes up for losing in the Final during the last few seconds last year to Sheffield. We really wanted to fight from the start today because of that and I think we did it.”

Both teams were slow to settle offensively with 13 points scored in the opening seven minutes. GB junior international Asha Andrews hit a three to double the Suns’ advantage at 12-6 before Betsy Macdonald soon tied the game with a pair of triples in an 8-2 response.

Monakana finished the opening period with the final five points to make it 19-14 to Sevenoaks and their advantage would increase going into half-time with a 32-24 cushion after a hard-fought second period.

The Suns did the damage in the third quarter as they pulled clear to take complete control of the contest as a 17-6 spell contained a barrage of scores from downtown. Nicolette Fong Lyew Quee ended the third with a three for Durham, though they still trailed by 19 at 59-40.

Last season’s Trophy finalists continued to battle in the fourth with Macdonald scoring her side’s final 10 points to finish with 21 in defeat.

This is now Sevenoaks’ seventh WBBL title having won all of those since the 2016-17 season.