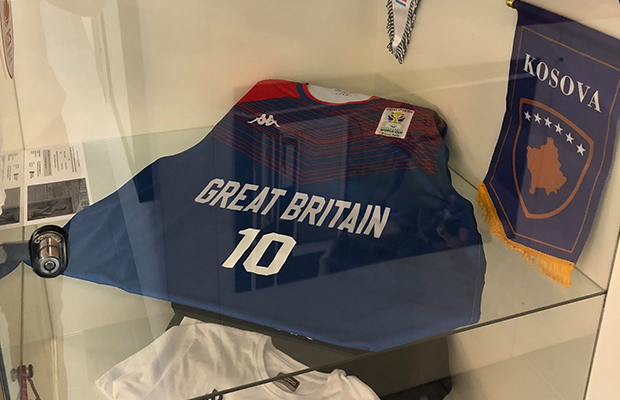 The National Basketball Heritage Centre (NBHC) will be hosting a pop-up exhibition around the Great Britain national team programmes ahead of this Friday’s Worcester Wolves v Newcastle Eagles match up.

The exhibition, titled “Basketball Heritage and Nostalgia” will be held in the Joel Richards Conference suite in University Arena and will be open prior to tip off from 6:15pm, at halftime, and until 9:30pm following the game. Entrance is free to anyone with a ticket to the game.

On display will be the NBHC’s collection of National Team memorabilia which includes game used uniforms, gear, and equipment from some of GB and England’s biggest stars of the past and present. England and GB Women’s National Team player, Siobhan Prior will be in attendance with some of her memorabilia from the 2018 Commonwealth Games including her silver medal.

The exhibition will feature a section on Basketball Nostalgia which will include a sample of the NBHC’s collection of basketball memorophilia from the past 70 years. Fans will be given a taste of the extensive collection of periodical literature held in the National Basketball Library, and will be transported back to their formative years of being a basketball fan in the United Kingdom.

The NBHC was founded at the University of Worcester in 2016 to showcase the valuable, unique, and inspiring history of basketball in the United Kingdom. It has since been recognised as the central depository for all basketball history related material by the sport’s national governing bodies.

The NBHC is accepting donations of basketball material with historical merit. In particular they are currently looking for national team items (GB, England, Scotland, and Wales) including uniforms, photographs, and programmes, particularly from the 20th century (1900’s to 1990’s), and items related to the 1948 and 2012 Olympic Games.

They are are also looking to complete the National Basketball Library’s collection of Slam Magazine. If you have anything that you think may be of interest to the NBHC, please email Roger Fairman at [email protected]