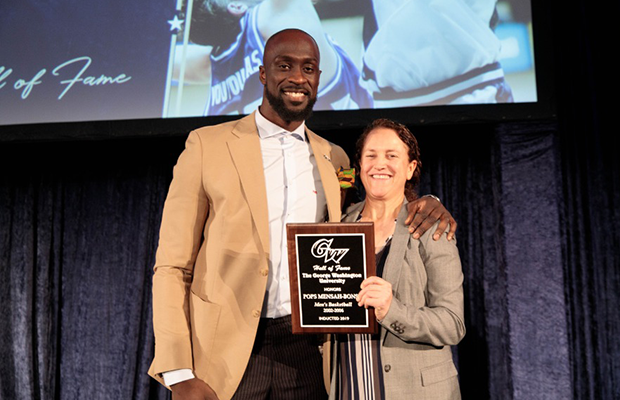 Former Great Britain star Pops Mensah-Bonsu has been inducted into the George Washington University Hall of Fame, enshrined in front of a record crowd of family members, teammates, friends and fans.

Mensah-Bonsu was joined at the Athletics Hall of Fame by a large community of family members, GW teammates and coaches, and colleagues at the Capital City Go-Go, where he serves as the G-League Team’s General Manager, along with his former GB teammate Luol Deng.

Last week I was blessed with being inducted into GW Athletics Hall Of Fame! My boy @shawnjamesbk told me not to be too humble as this is a big accomplishment. It’s not in my nature to boast or brag (unless I’m on the court‍♂️) but my boy @kha_law told me something that I hadn’t realized until last week. He reminded me that I came to this country in 99’ and played my first NBA game in 06’. In the span of 7yrs I went from playing JV basketball as a sophomore in high school to playing on the best team in the NBA as a rookie. Friday night was the induction, during my speech I had planned to thank many of the people who helped me along this journey but due to the emotions of the moment I missed the opportunity to thank everyone. To those I may have missed, especially the ones in attendance, forgive me for not recognizing you. Know that you played an integral part on my life and career, and for that I love and thank you. Thanks to @meghan.mcpeak and @kay_symonds12 for the production. Documentary coming soon!

“I’m not supposed to be here,” Mensah-Bonsu said, reflecting on his humble background and extremely raw talent.

The 6’9″ explosive forward averaged double figures and led his team in blocks all four seasons at GW from 2002-06. Among the league’s top rookies with 10.1 points and 5.7 rebounds per game as a freshman starter in 2002-03, Mensah-Bonsu provided 11.6 points and 5.4 boards in a reserve role en route to being named the Atlantic 10’s Chris Daniels Most Improved Player as a sophomore on GW’s 2004 NIT team.

He then averaged 12.6 points and 6.6 rebounds as a junior, earning Second Team All-Atlantic 10 and All-Championship Team honours as he helped GW capture its first-ever A-10 Championship title and make the 2005 NCAA Tournament.

Pops, whose professional playing career spanned nearly a decade in the NBA, Europe and the 2012 Olympics, ranks 25th all-time at GW with 1,308 points on 58.4 percent shooting, fourth with 141 blocks and just outside the top 10 with 676 rebounds.

President Thomas LeBlanc also addressed the night’s honourees as “role models for our communities, not just for our student-athletes.”

My brother @popsmbonsu we've seen it all from the start, we saw the work and the sacrifice you've made every day to not only be great but to also leave your legacy behind to remind us all of what we can achieve with determination. This was a very special night, seeing you being inducted to the Basketball Hall of Fame at George Washington allows the rest of us to feel proud of where we came from, and the best part is you did it with class and respect which reflects more on your upbringing and culture. We are so proud of you and extremely excited for the future. #africans #england #london #georgewashington #nba Mandem looking fresh that’s because the #AyeComeOn suit is made by @lynchandmason