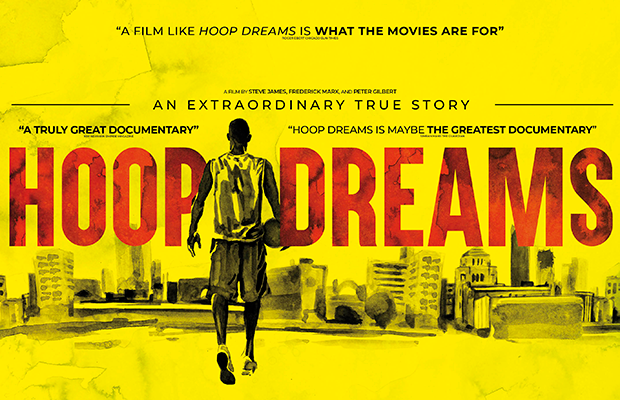 Celebrating its 25th anniversary, ‘Hoop Dreams’ the iconic documentary following two young basketball players with dreams of making it pro, will be embarking on a 22-stop tour across the UK to introduce the film to a new generation of filmmakers, students, and doc lovers.

Having not been screened in the UK for over twenty years, the film, which first exhibited at the 1994 Sundance Film Festival where it won the audience award for best documentary, was remastered in 2014 frame-by-frame and is now being brought back to a British audience by Kent based documentary film distributor Violet Pictures.

Of the 500,000 kids who play basketball in American high schools yearly, about 25 will make to play one season professionally.
See Hoop Dreams this Sunday with a panel Hosted by Anthony Andrews in conversation with Sam Neter@weareparable @Hoopsfix https://t.co/WRBtRgSeWv pic.twitter.com/VI0ZrQpDrB

A number of the screenings will feature Q&As with various film critics, including yours truly on Sunday at Picturehouse Central in Piccadilly Circus (tickets here).

Widely considered one of the best documentaries of all time, it is the remarkable true story of two American dreamers; an intimate reflection of contemporary American inner-city culture, following two ordinary young men on the courts of the game they love.

Plucked from the streets and given the opportunity to attend a suburban prep school and play for a legendary high school coach, William Gates and Arthur Agee both soon discover that their dreams of NBA glory become obscured amid the intense pressures of academics, family life, economics, and athletic competitiveness.

The International Documentary Association’s “All-Time Greatest Documentary” Hoop Dreams will be returning for a remastered Q&A tour across the UK this October! Follow us for news and ticket info about this incredible cinematic event… 🏀 #film #doc #documentary #HoopDreamsUK pic.twitter.com/pNf2g0xAG6

“The International Documentary Association named it the best documentary of all time in a 2007 poll,” writes this Time piece chronicling the impact the film has had.

“The three-hour film, which follows two black teenagers in their wearied quest to make it to the NBA, sits in the Library of Congress’ National Film Registry alongside Citizen Kane and The Godfather.

“Perhaps more importantly, the film ushered in a new wave in which documentarians, buoyed by newly interested financiers and the opportunity to screen in national theaters, imbued difficult topics with personal warmth, rigorous patience and narrative force. In many ways it is the forebear to the documentary boom happening right now, in which works like Leaving Neverland, Minding the Gap and Surviving R. Kelly are driving national conversations about justice, abuse and equality.”