NBA Crossover to return to London 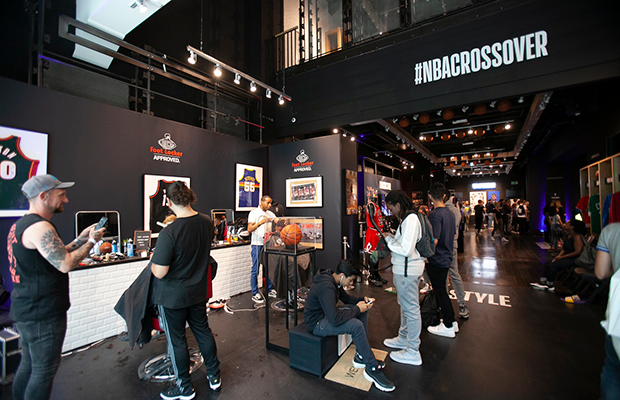 The NBA announced that NBA Crossover will once again return to London in September. The free exhibition, displaying the convergence of the NBA and popular culture, will take place at Phonica, 51 Poland Street, W1F 7LZ, from September 20-22 and will feature NBA Legend Kenny Smith.

NBA Crossover takes a unique perspective of the NBA, immersing fans into the league through interactive exhibits, escorting the visitor through a cultural journey focusing on how music, style, art, and entertainment have shaped and influenced the NBA, its teams and players.

Two-time NBA Champion Kenny Smith will headline the event and be present throughout the weekend participating in various activities and competitions, signing autographs and interacting with fans. Throughout his ten-year career, Smith played for six teams, most notably with the Houston Rockets where he spent six seasons, winning back-to-back NBA titles in 1993-94 and 1994-95. Smith is currently an NBA studio analyst for Turner Sports.

“Fans are in for a treat at NBA Crossover London,” said Smith. “I look forward to experiencing the event first-hand and connecting with NBA fans from the UK and across Europe as we explore the cultural influence of basketball and the NBA on popular culture.”

“NBA Crossover is a chance for the NBA to showcase its impact beyond the hardwood,” said NBA Managing Director, Europe and Middle East, Ralph Rivera. “Fans in the UK have a deep appreciation of the role the NBA has on music, style and entertainment. We are excited to once again host NBA Crossover in London and look forward to working with our partners including Foot Locker, Gatorade, Tissot and 2K to give visitors a unique and authentic NBA experience.”

NBA Crossover will feature specific areas focusing on how music, style, art, and entertainment have influenced the sport of basketball, demonstrating how the NBA has become synonymous with popular culture. Fans will have the unique opportunity to engage with the league through customized activations including virtual reality experiences, art displays, photos with The Larry O’Brien Trophy and panel discussions with local speakers.

Other activities include the Foot Locker barbershop where fans can get a haircut in an authentic barbershop. Fans can also bring in their sneakers, leather goods or textiles and visit the special customized section to get unique NBA team logos on their shoes or bags.

Gatorade will be onsite offering fans samples of their products and the chance to participate in different challenges to win Gatorade prizes.

Tissot will host a ‘Buzzer Beater’ game where fans will race against the clock to score as many baskets as possible in 24 seconds for a chance to win tickets to an NBA game in the US. Fans will also have the opportunity to win a Special Edition Tissot x NBA Chrono XL watch each day through taking part in Tissot’s ‘Code Cracker’ challenge.

There will also be an NBA 2K20 Gaming area for fans to play the latest NBA 2K20 video game which launches globally on September 6.