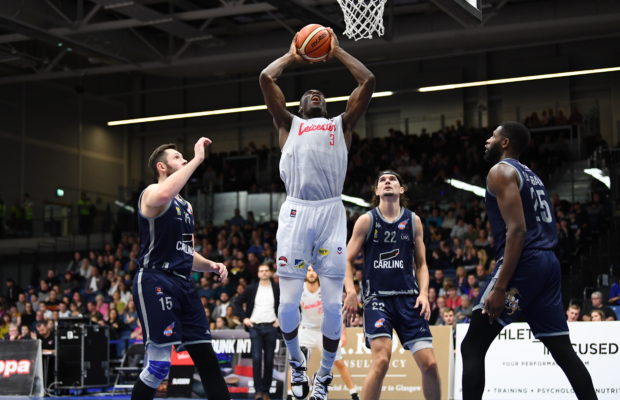 Another week of the BBL Power Rankings as we take a look back on the recent results and track the 12 teams’ momentum throughout the 2019-20 campaign.

London City Royals are still unbeaten, Sheffield Sharks are still rising in the North and two teams have their first win – albeit in different circumstances.

Five wins from five, and the Royals are doing it the hard way. They went down to the wire on the road yet again on Saturday, but Lloyd Gardner’s side outlasted Surrey Scorchers for an 82-84 victory. Matt Scott continues to prove to be a more than handy acquisition with the American putting up 23 points as well as an eye-catching 18 rebounds with Darjus Lavrinovic adding 18 points on 8 of 9 shooting.

The Royals are finding different ways to win and their resilience is coming good in the clutch moments under pressure from their opponents – and their last two have been without Andrew Lawrence. Back on home court this weekend as Worcester come to Crystal Palace with a sixth win from six moving the capital side one step closer to locking up a home quarter final.

That Sharks momentum we spoke of last week is showing no signs of slowing down as they leapfrogged Newcastle into top spot in the North Group with a hard-fought 80-83 triumph in overtime. Atiba Lyons saw his side battle back from as many as 17 down in the North-East to stun the Eagles with a dominant fourth quarter setting up the win in the extra period.

Bennett Koch was an efficient 6 of 7 in his 18 points with five other players in double figures showing the array of offensive weapons as Nick Lewis and Connor Cashaw also posted double-doubles. The return fixture takes place at Ponds Forge on Friday as Sheffield have the opportunity to open up a lead at the summit.

Thank you, #SharksNation, for your fantastic support on the road tonight! 👏👏👏

17 points for Rahmon Fletcher, 17 points for John Mitchell, but a lead of 17 points they let slip at home to Sheffield. Subsequently, the Eagles drop to joint second in the North with an immediate chance to put that right with the return trip to take on the Sharks.

Newcastle hit 10 triples and out-rebounded their opponents, but were held to just 24 points in the second half before being unable to halt the Sharks in the extra period as they fell to an 80-83 loss in overtime. Still well placed with the top three sides all on the verge of securing their places in the last eight.

Write Leicester Riders off at your peril. Backs against the wall with recent defeats and injuries mounting, this is just the type of game that Rob Paternostro relishes. And his team delivered to see off Glasgow Rocks in a convincing 66-88 win on the road to climb back into joint second in a tough North Group in the Cup.

Up stepped Jesse Chuku with a season-high of 21 points. Up stepped Rema Lascelles, inserted into the starting lineup and responding with a double-double of 11 assists with 13 points without a miss from the field. Up stepped Andy Thomson – the consummate pro and experienced leader weighing in with 18 points in his trusty role off the bench. And, not forgetting Darien Nelson-Henry who scored 11 points in 13 minutes on his debut for the club. Manchester up next at home.

Things were looking great on Friday night when Kofi Josephs’ lights out performance carried Worcester to victory down the stretch as they edged out Plymouth 104-100 to move to 4-1. However, things could not have been more different less than 48 hours later as they suffered an 83-53 reverse as the offence was shut down by the same opponents.

Josephs had scored 29 points in the home win with Jordan Williams close behind with 25, though the duo combined for 22 in Sunday’s loss on the road with Worcester held to 27% shooting including 5 of 30 from beyond the arc.

Two in a row for high-flying Bristol. The Flyers came out on top in a high-scoring thriller against London Lions with 58% success inside the arc in the 97-94 win. Fred Thomas top scored with 20 points with namesake Gentrey contributing 13 points, nine rebounds and seven assists in an all-round display and Raphell Thomas-Edwards tallied 13 points and 11 rebounds for a double-double.

Bristol are in third place in the South Group, a win behind Worcester, who they meet on the opening night of November, but first have a South-West derby to contend with having beaten Plymouth by 20 points in the recent meeting at the SGS Wise Arena.

The defending Cup champions are finally off the mark in the win column. After dropping to 0-3 with a three-point loss on the road against Bristol, the Lions returned home to beat Plymouth 101-86 behind 17 points apiece from Justin Robinson and recent addition Jules Dang Akodo in another improved display.

A sign of things to come for the Lions, perhaps, and with the pending addition of Ovie Soko still to come, they could be well placed by the time the league campaign begins in December. Their hopes of advancing from the Cup are far from over with six games still to play and will sense an opportunity with a trip to Surrey this weekend ahead of another derby clash with London City Royals in November.

On the grand scheme of things, Glasgow are perhaps not the eighth best – or fifth worst – team in the BBL, but momentum also plays a factor in these rankings. While it’s no disgrace to be beaten by Leicester, it was a chance lost for the Rocks to make their move in the North Group and they were caught cold in the middle periods (outscored by 20) with Ali Fraser finishing as the leading scorer with 26.

Glasgow were then dropped to 4 in the loss column after Manchester Giants won their appeal in preventing a replay of the opening fixture between the two after the Rocks were found to have fielded three ineligible players. Another game at the Emirates Arena awaits on Friday as Cheshire make the trip north in a battle of the two teams looking to strengthen their case for the last eight.

Two wins from two for Cheshire as they took the North-West spoils on Friday with an 18-point win away at Manchester. Jalen Hayes battled away inside to pour in 32 points with point guard Parker Jackson-Cartwright producing an incredible stat-line of 23 points, 11 rebounds, eight assists and nine steals in a near quadruple-double effort in the victory.

Ben Thomas was still without influential captain Momcilo Latinovic as his side now look to continue their momentum heading into an important clash with Glasgow on Friday with the two sides locked at 2-4 in the crucial fourth spot in the North Group, before they host a surging Sheffield side on Sunday.

A tough week for the Raiders with three games in five days and after splitting a weekend double-header with Worcester, they were comfortably beaten by the Lions on Wednesday night. Plymouth were edged out 104-100 on the road on Friday night before bouncing back in style in front of their home fans to win by 30 in an astonishing turnaround.

Tyrell Johnson posted 17 points and 13 rebounds in the victory from the bench with Rashad Hassan also adding 17 points, while Josh Wilcher had fired in 26 points in the four-point road loss. A game-high 22 points from Johnson could not prevent a 101-86 defeat in London and Paul James’ side will be keen to re-group as they look to avenge their recent derby loss when they host Bristol on Sunday.

It’s still not happening for the Scorchers even if there have been far worse sides in BBL history that have started 0-4. They pushed the unbeaten London City Royals all the way at home on Saturday and even took the lead down the stretch before coming up short once again.

With no Caylin Raftopoulos and Sol Rolls-Tyson, the lack of depth showed with Tayo Ogedengbe leading the way with 22 points along with solid displays from their American trio as Chip Flanigan dished out 10 assists to go with 11 points. Surrey welcome another side from the capital on Saturday as they face the Lions with another chance to get a win on the board in a huge game for both.

Victory, at last for the Giants, albeit courtesy of winning an appeal over the BBL panel’s ruling to replay their game against Glasgow as they take a 20-0 win. They would have targeted Friday’s home game against Cheshire Phoenix as a golden chance to succeed on the court, but fell away to a disappointing 64-82 defeat.

Callum Jones top scored with 13 points as six players in total scored at least nine points, though their collective effort of 1 of 20 from 3-point range was never going to help their cause. Del’vin Dickerson struggled after going 2 of 16 from the field although the American still made the headlines with an early dunk of the season contender, as seen below: