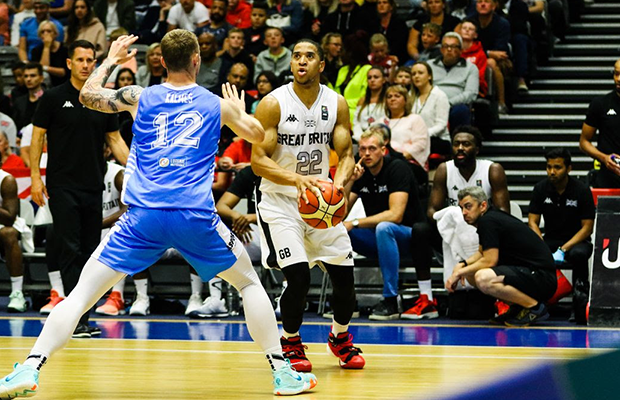 Great Britain Senior Men dominated the fourth quarter to get past Luxembourg 71-54 on Saturday night at the NBPC in Manchester.

Nate Reinking’s side won the final period 23-2, holding Luxembourg to 1-of-14 shooting, as they broke open an otherwise close game.

Myles Hesson had 22 points and 8 rebounds to lead GB, Gabe Olaseni added a 12-point, 13-rebound double-double, and Teddy Okereafor joined them in double figures with 10 points, 7 rebounds, 4 assists and 3 steals.

“We didn’t put our heads down the whole game, we stuck together through thick and thin and it shows what type of players we’ve got on the team,” said Hesson.

“It was really close, but we depend on each other and people came up with big steals towards the end and we were able to grind it out.”

“In the first half we lacked a little bit of energy and we just didn’t finish the shots that we could have, especially around the rim,” said Reinking, reflecting on the win.

“In the second half we woke up a little, especially defensively with the pressure. I think that turned them over a little bit which led to some easy buckets and we just got that momentum going for us from there.”

Luxembourg Head Coach Ken Diederich added: “I think everything went wrong [in the 4th quarter]. I think that we were pretty much level going into the 4th and we had our game plan in place. Down 3, down 5 maybe. Then we turned the ball over. We had 22 turnovers and I believe we had at least 8 in the 4th quarter. GB finally found their rhythm, they played fast, hit shots and we fell apart and that’s tough as I thought we deserved better.”

Hesson started the game well to contribute eight of GB’s 22 1st quarter points. With the hosts showing their intent on the glass, Luxembourg looked outmatched. Winning the rebound battle 15-7, including a 7-0 advantage on the offensive boards, set the tone early for the home side as they led 22-15 after 1.

Luxembourg would regroup, fashioning a 2-8 run that sent GB into an early time out to start the 2nd quarter. With the familiarity of a unit that has been playing together for a considerable amount of time, the visitors grew into the game and their confidence began to show.

Hesson was the man to stem the flow, moving into double digits as GB scrapped to stay in front. Eventually they’d do just that, but only just, leading 32-31 at the half.

Despite the team’s struggles from range during Wednesday’s win over Kosovo, GB continued to take aim from deep in Manchester. Going 2/15 in the first half provided a familiar result, but just as they did in Mitrovica, GB eventually found some success in the 3rd.

Following a 3-10 start to the frame that once again sent GB to an early time out, Conner Washington and then Ashley Hamilton both connected from beyond the arc to keep GB in touch.

Teddy Okereafor joined the party as he scored eight points in the 3rd, but Luxembourg were persistent. Six of Luxembourg’s captain Alex Laurent’s eventual 14 points came in the 3rd as GB trailed 48-52 going into the final quarter.

From there, the game turned on its head. Opened by a huge dunk by Hesson, GB upped their game as the visitors went 0/7 from the floor. By the time they did find the net, Reinking’s men had energised the local crowd with a 9-0 run to push themselves out to a modest lead, and from there GB ran away with the contest.

GB now enjoy a week of practice ahead of their next game when Kosovo will head to Manchester’s National Basketball Performance Centre for GB’s 3rd game of Group G, at 7pm on Saturday.