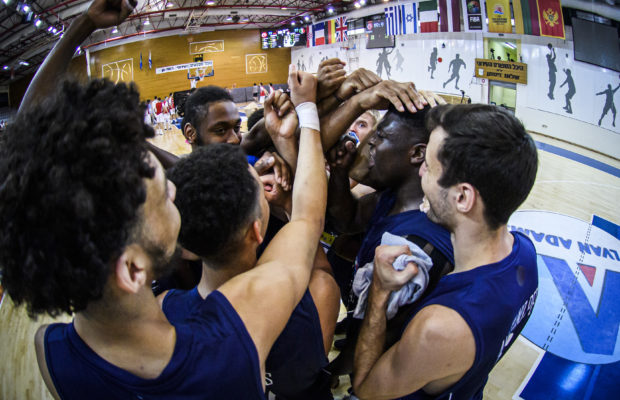 Great Britain Under-20s advanced to the quarter-finals at the European Championships after beating Serbia 77-72 in Tel-Aviv, Israel, on Wednesday afternoon.

Karl Brown’s side went 0-3 in the group phase – and were without leading scorer Kareem Queeley – but rallied to pull off an impressive result in the Round of 16 against the Group B winners.

“We have created a great feeling, family environment,” said Brown post-game. “We made tough plays and stuck to the plan – I am incredibly proud of the guys but we still have work to do!”

Niall Harris and Nathan Robinson also finished with 11 points apiece in the win.

Robinson hit the first five points for GB with Marko Pecarski picking up two early fouls. A mini 6-0 run later put GB back ahead and they had a narrow 17-15 advantage after 10 minutes.

Spence sparked an 8-2 run with back-to-back scores as GB led 25-19 and were up as many as seven in the second period when Henry knocked down a triple. However, Serbia closed the gap – largely through Pecarski, who had 16 points at the half with his side 36-33 behind.

An even open to the third ensued before GB scored six straight to lead 48-42 in a spell that contained huge plays from Henry and Kitenge on either end of the floor. Serbia hit a three at the buzzer to cut GB’s lead to two at 52-50 before Pecarski put his side into the lead early in the fourth.

Jacob Round hit a three in response and neither side were able to take control and pull away in the contest. Henry began to come up big for GB. A three tied the game before later giving GB the lead with a personal 6-1 run to make it 71-66 ahead of the final minute.

GB held their nerve down the stretch, knocking down free throws to ice the game and secure their spot in the last eight – also securing Division A status.

They will next face Germany on Thursday with today’s result already guaranteeing a best-ever finish.