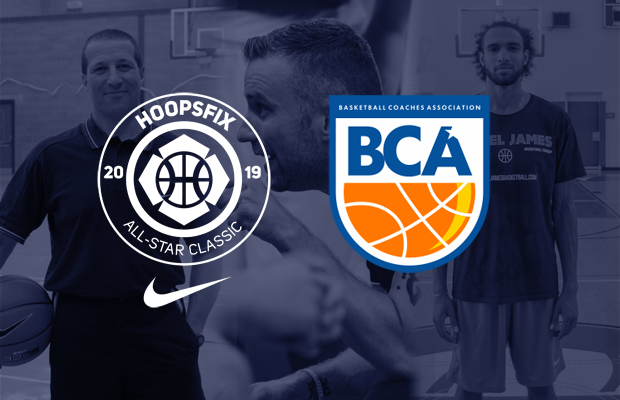 The line up for the 2019 Hoopsfix All-Star Classic Coaching Clinic has been revealed, as the first attempt at a coach education session will be done in partnership with the newly re-formed Basketball Coaches Association in the UK.

The BCA has been dormant for over a decade, and with the lack of CPD opportunities for coaches available, a group of coaches have decided to re-launch the membership-organisation with the intentions of holding multiple clinics, networking opportunities and an annual conference.

“We are looking to get the Basketball Coaches Association up and running to help coaching development within the UK,” said GB Senior assistant and Barking Abbey’s Lloyd Gardner, the man spearheading the relaunch of the organisation.

“The Hoopsfix All-Star Classic is a great event, showcasing British talent and we are looking forward to being involved with the coaching clinic.

“We want it to be inclusive so anyone wanting to get involved should get in touch.”

Aptly, Mark Dunning – one of the original co-founders of the BC – will be presenting an hour on-court session, ‘A Multi-Purpose Drill for All Levels’ on Sunday. Before he takes to the court, former England U18 and NCAA D1 player Daniel James – now a skills trainer – will run through some of his favourite drills to ensure a fundamental base.

The group of coaches will then head to the classroom for an hour with GB Under-16 and Barking Abbey coach James Vear sharing his experiences with the National Team, including a comparison of the GB U16s up against their European counterparts.

The schedule for Sunday at Brixton Recreation Centre is as follows:

The 30 available spots for coaches to pre-register have now been filled, but you can join the reserve list incase of any drop outs as well as receiving future information about the BCA by emailing [email protected]

Tickets for the games on Sunday are now sold out but tickets still remain for Saturday’s U19 Women’s game – buy here.