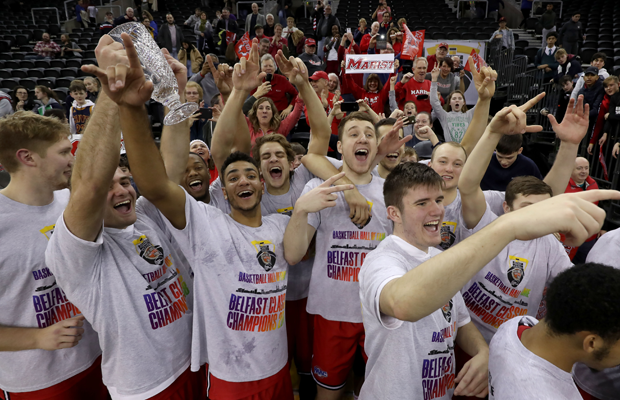 Marist picked up the Samson Bracket championship at the second annual Basketball Hall of Fame Belfast Classic, defeating LIU Brooklyn 70-53 at the SSE Arena in Belfast.

Marist used a 14-0 run in the opening phase of the game to take control and never looked back leading by as many as 27.

It's the luck of the Irish!

Speaking on their team’s victory, Marist head coach John Dunne said: “We’re really excited about the win. I know we controlled the game from start to finish…the guys played with great passion and desire and poise.

“The finish could have been a little cleaner but at the end of the day winning any kind of tournament is a majorly positive. We’re really happy…and we had some fans here in Belfast that we put some smiles on their faces. We have a great fan base.”

LIU were led by 10 points from Craig Owens Jr, as the Red Foxes held Raiquan Clark, LIU Brooklyn’s leading scorer who came in averaging 23.0 points per game, to a season-low eight points.

And your Samson Bracket Most Valuable Player, from @MaristMBB, Brian Parker!!! Huge congrats to all!

Junior Brendan Barry put on a long-distance shooting clinic drilling seven 3-pointers as Dartmouth sank a total of 17 from the perimeter to defeat Albany, 91-77, in the consolation game of the Samson Bracket of the Basketball Hall of Fame Belfast Classic.

Convincing win for the Big Green @BelfastClassic ! See you back in Hanover for a 4️⃣ game home swing. pic.twitter.com/mAnSOZGJ2n

Barry, the NCAA’s active career leader in 3-point percentage, finished the game with 25 points for the Big Green (4-4), while junior James Foye and sophomore Chris Knight both set career highs with 20 points apiece.

The Green wasted little time in establishing their hot hand as Jackson got the fireworks started with a triple on Dartmouth’s first shot of the game and never trailed as Barry rained down his first attempt on the next possession. Knight took over for the next three minutes, tallying eight straight points for a 14-9 lead five minutes in.

Knight’s last bucket started a 17-0 run for the Big Green as the 3-pointers started to come more quickly, and Dartmouth never looked back.

The Buffalo Bulls secured the first spot in the Goliath Finals Championship Game on Saturday by beating University of Wisconsin – Milwaukee 96-77 on Friday morning.

“I was happy with the fight of our guys today and I think they are really starting to gel,” said head coach Nate Oats. “We gave them a few more runs than we would have liked, but I really liked the response of everyone on our team. I thought today was a total team victory.”

Senior Jeremy Harris led UB with 21 points, going 8-of-14 from the floor, while adding four assists. Perkins added 20 points and nine rebounds, as he tied his career high with four three pointers. He surpassed Calvin Cage for 11th place on UB’s all-time scoring list in the win.

Carson Warren-Newsome had 26 in defeat for Milwaukee.

University of San Francisco sailed to victory with a 76-58 win against Stephen F. Austin to remain undefeated on the season and set up a tantalising match-up in the Goliath Bracket final on Saturday.

USF improved to 7-0 for the first time in 37 years following the win, as they will now match-up with fellow undefeated side Buffalo in the final, as one of them will see their perfect record go.

Discussing his team’s victory, Head Coach Kyle Smith said: “It was a great effort on our guys’ part. Stephen F has had a lot of success with their program. I know right now we are playing pretty well. We just take it day by day, possession by possession. This group has some special leaders and that’s what it takes to get to that level. It takes leadership and caring for one another, and we’ve got that.”

Jordan Ratinho was one of four Dons in double figures, he finished with a game-high 19 points going 7-for-13 from the field and 5-for-10 from 3-point range. Also in double figures was Charles Minlend who had 16 points. Frankie Ferrari had 14 points and nine assists.

Marc Mulholland, Executive Director of the Basketball Hall of Fame Belfast Classic remarked on the second day of action, saying:

“I’m delighted that the Tournament has been a resounding success so far, with gameplay today even more impressive than yesterday! It’s great to see such an enthusiastic turnout of supporters from around the world over the last two days and we only hope tomorrow’s Goliath Bracket Finals attract even more visitors to the SSE Arena to experience an extraordinary level of college basketball!”

On Saturday 1st December, the tournament will see the Basketball Hall of Fame Belfast Classic come to an end for another year, with the Goliath Bracket Finals gameplay beginning at 1.00pm as Stephen F. Austin State University and University of Wisconsin-Milwaukee fight it out in the Consolation Game.

Stat of the night: Out of 347 NCAA Division 1 Men's Hoops teams, only SEVENTEEN are left undefeated! And tomorrow, two of them will do battle on the @SSEBelfastArena floor! #21 @UBmenshoops vs. @USFDonsMBB!! Let's go!!! #BelfastClassic2018 #UBhornsUp #USFDons

After this, the tournament will reach its pinnacle for the weekend with the final game featuring the University at Buffalo Bulls and University of San Francisco Dons, which can be watched in the UK on BBC Sport online.

Tickets are still available at belfastbasketballclassic.com.