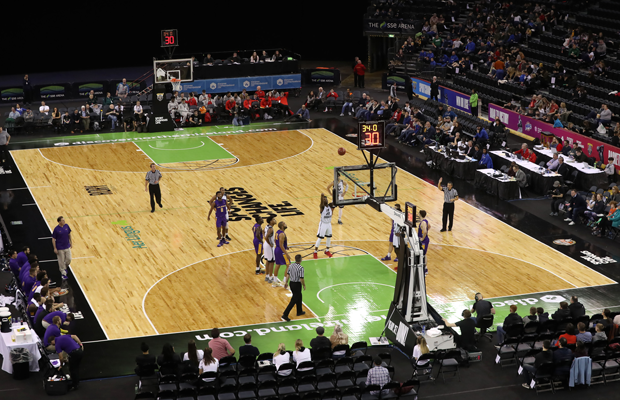 After months of anticipation, the Naismith Memorial Basketball Hall of Fame Belfast Classic kicked off in style on Thursday at Belfast’s SSE Arena, with two games taking place.

Eight NCAA Division 1 teams arrived in Northern Ireland over the course of the week to compete in the Belfast Classic Tournament.

Now in its second year, the three-day tournament brought to Northern Ireland through a partnership with the Sport Changes Life Foundation, Naismith Memorial Basketball Hall of Fame and the Metro Athletic Conference (MAAC), is the only NCAA competitive collegiate basketball tournament to take place in Europe.

Day one of the Belfast Classic saw thousands of basketball fans and enthusiasts travel to Belfast’s SSE Arena from across the island of Ireland and further afield including the United Kingdom and the United States.

The Samson bracket began their title race on Thursday, with Marist College prevailing 76-58 over Dartmouth College in the opening game of the day.

The Red Foxes are on to the championship game of the Samson Bracket after a triumph over Dartmouth. #GoRedFoxes #BelfastClassic18 pic.twitter.com/KyxoSsBkll

Marist erased a 14-8 deficit with an 18-0 run that included 3-pointers on four consecutive possessions, including three by Funk, and then used 13-2 run to open the second half to take their largest lead of 20. Dartmouth got within seven with 4:27 left with an 11-2 run but didn’t score again as Marist closed with an 11-0 streak.

Funk was 4 of 6 from the arc and now has 203 3-pointers, becoming the sixth player in Marist history to reach the 200 milestone. Darius Hines added 10 points and Aleksander Dozic scored nine points with eight rebounds.

Chris Knight led the Big Green (3-4) with 16 points with Brendan Barry and Taurus Samuels scoring 11 each.

Bringing the first day of the tournament to a close was Long Island University Brooklyn prevailing 80-77 over the University at Albany, to set up a Samson Bracket final match-up with Marist.

BLACKBIRDS WIN! #LIUMBB pulls out the 80-77 win over Albany in the semifinal round of the @BelfastClassic! Clark led all scorers w/ 27 pts, Agosto w/17, Batts w/14. Blackbirds will play Marist in the championship game TOMORROW at 2 p.m. ET on @CBSSportsNet! #blackbirdnation pic.twitter.com/vviJvdwg4a

LIU Brooklyn rallied from a 12-point deficit in the first half to pull out the win, as the Blackbirds improved to 4-3 on the season.

They were led by senior Raiquan Clark, who had 27 points, 20 of which he scored in the second half.

It was a tale of two halves for LIU, who struggled to score in the first half, and then erupted in the second half. The Blackbirds made just seven field goals in the first 20 minutes, shooting 21.9 percent from the field, but made 61.3 percent of their shots in the second half to rocket past the Great Danes (2-5). The Blackbirds also forced Albany into 26 turnovers in the contest.

“We’ve been working to try to get the pace of the game a little faster and a little more chaotic. That didn’t really happen much in the first half, but I was happy to see – we kept at it a little bit and made some shots and I feel we loosened them up in the second half.

“We were very fortunate obviously to come away with a win. Both teams played hard and the guys kept competing, and good things happen once in a while.”

On the opening day of events, Marc Mulholland, Executive Director of the Basketball Hall of Fame Belfast Classic added:

“Today was a great first day for the Tournament. Each of the four teams that played today were a credit to their coaches, colleges and families as they demonstrated some excellent ball skills, teamwork and fast-paced play which is great for the local fans to enjoy!

“We are delighted to have been able to bring the Basketball Hall of Fame Belfast Classic back to Northern Ireland for the second year and couldn’t be more pleased with the continued growth of the sport throughout the island of Ireland.”

The second day of the tournament will commence on Friday, with teams from the Goliath Bracket; University of Wisconsin-Milwaukee, University at Buffalo University of San Francisco and Stephen F. Austin State University taking to the court, with gameplay beginning at 10.30am.

The Samson Bracket consolation game will take place at 5.00pm between Dartmouth College and University at Albany and the bracket gameplay will culminate in a Championship game between Marist College and Long Island University at 7.30pm, resulting in the first of the Belfast Classic Cups being claimed.

Tickets are still available for Friday and Saturday’s Tournament games from the SSE Arena box office or online at www.belfastbasketballclassic.com.