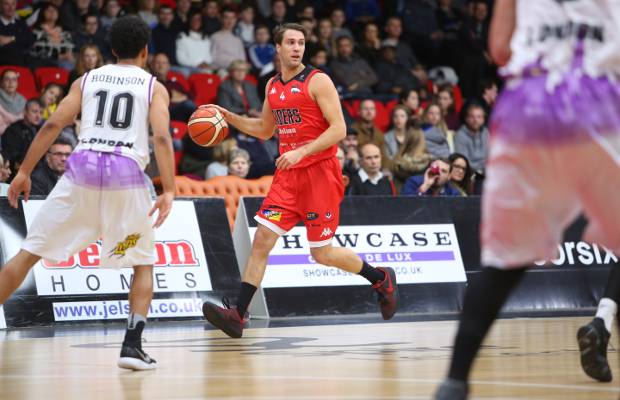 Leicester Riders will take on London Lions in the BBL playoff final at The O2 Arena on Sunday after they both came through their semi-finals over the weekend.

The Riders return for a third straight year after they overcame Bristol Flyers for a 166-143 aggregate success. Rob Paternostro’s side did the damage in the first leg with a 75-90 victory on the road before following up with a hard-fought 76-68 win at home, on Sunday.

Check out the Riders highlights as they booked their spot at The O2 with victory to close out the season at home!

The Riders will now face the London Lions in the BBL Playoff Final on Sunday 20th May! #BritishBasketball pic.twitter.com/STO3gtfmRu

Tyler Bernardini led the way with a 22-point haul and was delighted with his side’s triumph.

“An incredible win and to win the Semi-Final in front of our home fans is a great way to set the stage for next week,” he declared.

“The O2 is an incredible arena, the atmosphere is unreal and we’re excited to be going back.

“All the credit to Bristol – they came in fighting.

“They had a 15-point deficit – a lot of teams come [to the Morningside Arena] and don’t give that effort, but they made us really earn it.

“Fortunately for us, we were able to keep the pressure on for the full 40 minutes and come out on top to book our ticket to The O2.”

Meanwhile, London Lions produced an impressive display to beat Glasgow Rocks 77-91 on the road to secure their place in the final with a 169-155 aggregate triumph.

Thursday’s first leg at the Copper Box Arena ended in a rare 78-78 draw and the Lions pulled off their first win in Scotland since 2009 to advance.

Jonathon Thompson top scored in the second leg win with 17 points, while five other players hit double figures including Justin Robinson, who finished with 16 points and 4 assists.

“We were locked in and we took care of business,” stated Robinson. “We knew we couldn’t have another bad shooting performance like we did in London.

“Everyone is happy to make it to the Final, but our goal is to win the Play-Off Championship.”