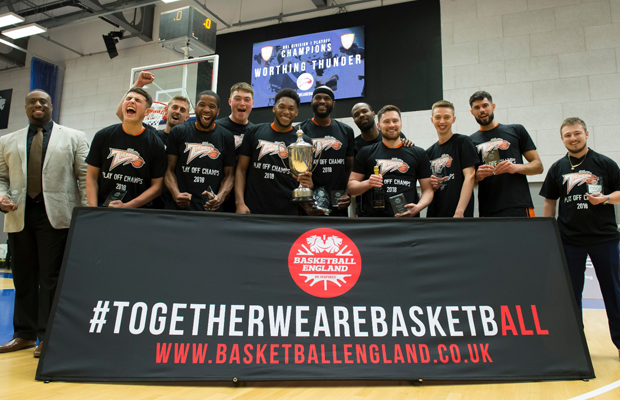 Marquis Mathis picked up MVP for his 26 point outing whilst dominating inside, Zaire Taylor had 15 points and 8 rebounds, whilst Brendan Okoronkwo had 12 points, 11 rebounds and 6 assist.

Worthing led by as many as 18, before a fourth quarter run from Hemel saw them draw to within four with five minutes to play but that’s as close as they would get. Worthing immediately responded with a 9-2 run, before a monster alley oop from Mathis sealed the win.

“It’s one of the best feelings ever,” Mathis told Hoopsfix. “I just told my teammates to cherish this moment because it’ once in a life time, it doesn’t come often. I been on this stage twice, and lost both times so it feels good to win now.

“It’s been a rocky season to start and we picked it up when I got here. Then things started to get situated, started to feel how each other play and from there we just took off.”

“It’s amazing. I didn’t think coming in we’d be where we are now. There’s been a lot of turbulence, we stuck it, the guys have been amazing, and everyone they stepped up and did what they were supposed to do and now we’re here.”

Mike Darlow had 12 points to lead Hemel, and AJ Roberts 10 points, 9 rebounds and 8 assists but was held to just 4-for-19 shooting.