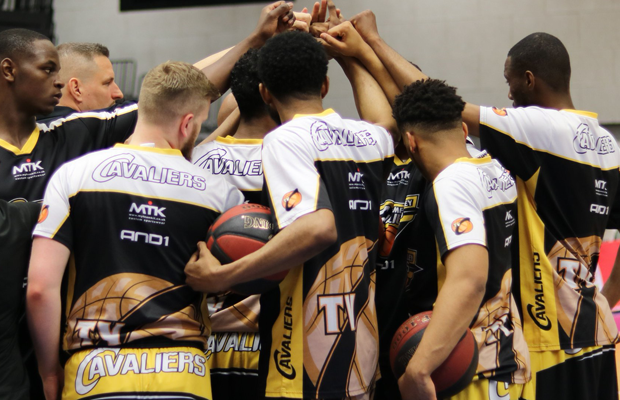 Thames Valley Cavaliers picked up their first piece of silverware this season with a 80-77 win over Nottingham Hoods for the NBL Division 2 Playoff title on Sunday morning at the National Basketball Performance Centre in Manchester.

Despite leading by as many as 18, Cavaliers had to hold off a furious fourth quarter rally from Nottingham and were able to pull out the win despite a woeful performance at the free throw line down the stretch, finishing the game 16-for-27.

Rob Banks Jr picked up MVP with a 21 point outing, whilst veteran Martelle McLemore once again showed his level with a 29 point, 7 rebound, 3 assist performance. Abdoullaye Sylla was monumental down the stretch with some huge game-saving plays on his way to a 17 point, 10 rebound, 3 block outing.

It was vindication for Thames Valley, who were upset in last year’s Playoff final at the hands of Kent Crusaders.

“It feels great,” the MVP said. “Especially after coming second last year. Coming back this year shows our resiliency, it was really on our mind all summer, and it was just great to win it with these guys as a team.”

“It feels fantastic. First of all I want to give credit to Nottingham for a fantastic battle. These guys never gave up, they did an excellent job all year and also i want to give a very big thanks to my team, they’ve battled very well and they came through in the clutch.

“We have a tendency to want to make it interesting at the end when it comes to games but we did it and I was hoping we were able to execute enough down the stretch to pull it out and we did.”

Tevis Robinson had 23 points, 5 rebounds and 4 blocks to lead Nottingham, Tintin Watts had 18 point and 8 rebounds, whlist Luke Mitchell had 13 points and 9 assists.

“There was a break in the game and I said to them this is the last six minutes of the game and they responded well but unfortunately it was too late.

“I don’t think we executed as well as we wanted to. Obviously they’re a very talented team, Martelle’s a hell of a player and Rob Banks Jr had a hell of a game.”

Captain Watts commented, “We started too late in our fightback. Thames Valley are a really good team and we came out really flat with no energy. They took full advantage of that as a side of their calibre would do.”