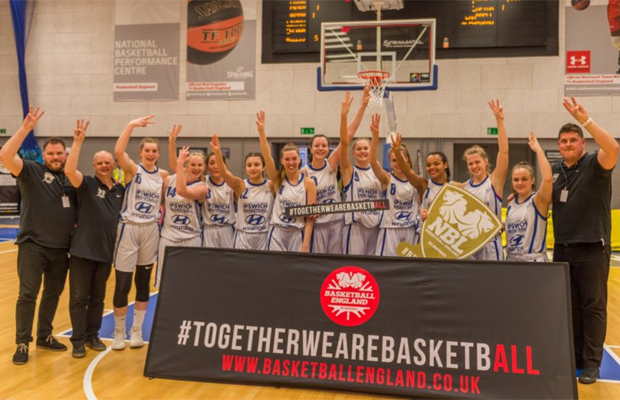 Ipswich completed their perfect season with a 96-55 win over Derbyshire Gems in the Division 2 Women’s Playoff final on Saturday afternoon at the NBPC in Manchester.

Harriet Welham picked up MVP with 33 points, 6 rebounds and 5 steals as Ipswich made light work of their opponents, never trailing to lead from start to finish.

“It’s just amazing,” Welham said. “We’ve had an unbelievable season as a team all together. We’ve won the Cup, the league, we’ve gone undefeated and this is the absolute cherry on the cake for us, it’s just unbelievable.

“This team is special, there’s no other way I can say it. Each one of us has a special relationship, it’s cheesy to say but they are my family and I wouldn’t want to do it with anyone else.”

It's all over in Manchester and Ipswich Women are NBL Division 2 Playoff Champions, winning 96-55

Top ranked Under-16 prospect Esther Little added 22 points, 13 rebounds and 6 assists for Ipswich, whilst Maya Price dominated inside with 14 rebounds, and 10 blocks to go with her 5 points.

Little commented: “Words can’t even describe it. If you’d have said it at the start of the season, people would have said ‘what are you saying?!’. For us to go undefeated it’s literally unheard of, especially from such a small town like Ipswich.”

Ipswich Head Coach Nick Drane was elated with the win and the season they’ve had:

“It’s historic. I don’t care if it’s Division 1, Division 2, WBBL, you can only beat what’s in front of you, so to win every single game that we played with a group of girls that are all from one little town in Suffolk is something that doesn’t happen very often.”