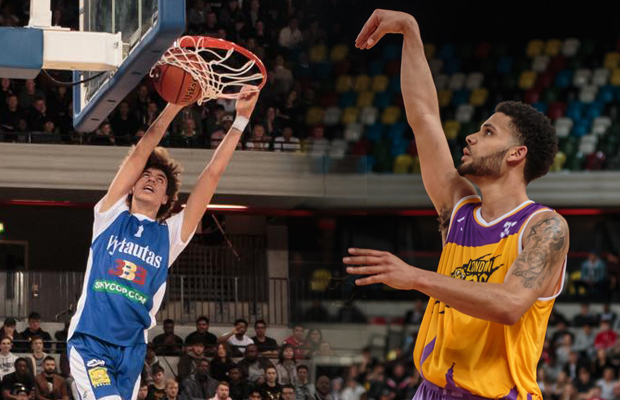 The Ball Brothers and BC Vytautas overcame London Lions 127-110 in the Big Baller Brand London Clash in front of 5,000 fans on Monday afternoon at the Copper Box Arena.

The exhibition saw little defence played from either side, as the teenage Ball brothers took full advantage; sixteen year old LaMelo had 39 points, 16 rebounds, 16 assists and 6 steals, whilst LiAngelo had 44 points, as they dominated the ball for Vytautas – who were coached by their father LaVar.

Vytautas are 5-23 on the regular season in the Lithuanian LKL, sitting in bottom place of the table (10th), whilst the Lions are 17-9 in third place in the BBL.

Jordan Spencer, in his first game as a professional since graduating from Augustana College, was impressive as he finished with 32 points and 8 assists to lead the Lions, going off for 25 points in the second quarter alone, lighting it up from beyond the arc.

Cory Dixon had 25 points and 20 rebounds, and Justin Robinson had 9 points in five minutes before exiting early with an injury.

A digital phenomenon with their own Facebook show which boasts over 1.4million followers, the Ball family have embraced social media, capitalising on the the presence of Lonzo Ball on the Lakers to grow the Big Baller Brand, along with the outspoken LaVar Ball and future NBA prospect LaMelo Ball.

The Big Baller Brand showed its pull in London, almost filling the Copper Box with a predominantly younger audience; one not normally seen at BBL games. Numerous pieces of BBB merchandise were visible in the stands during the game, as the pop up store near the entrance of the arena was swamped.

LiAngelo has recently declared for the 2018 NBA draft but is an outside shot of being selected. LiAngelo and LaMelo made the unprecedented move of turning pro in Lithuania this season; ‘Gelo’ dropped out of UCLA, whilst ‘Melo’ opted for the European pro route instead of High School and College as is standard for the majority of top US prospects.

The move to BC Vytautas also includes a partnership to help grow the Big Baller Brand. Whilst the brothers have seen more limited minutes in Lithuania’s top flight, the club has been taking part in Big Baller Brand exhibitions where the Balls can star.

The two teams combined to shoot 104 three-pointers, whilst the Ball brothers had the green light, combining for 77 field goal attempts between them.