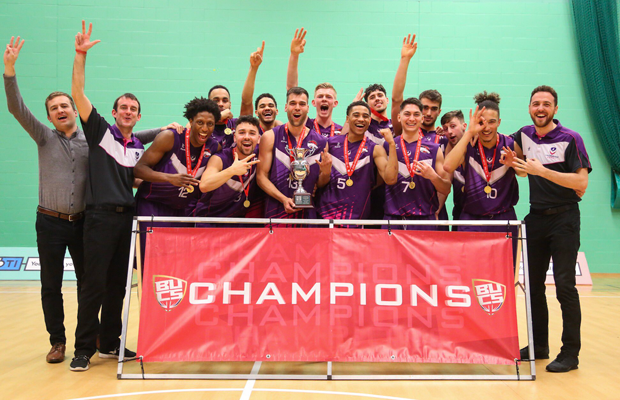 Loughborough University completed the rare three-peat with a 97-79 victory over Northumbria on Wednesday in Nottingham.

Eric Robertson made it back to back MVPs, scoring 25 points on his way to taking home the individual honours.

“It means a lot for Loughborough University and the basketball team to win three Championships in a row,” said Robertson to BUCS.

“I’ve only been a part of two and I was glad to be part of it all.

“This was by far our biggest game of the year, we had the most spectators at the game so naturally we had that motivation and raised the play, coming in here in the final was just fun.”

“We knew our defence was key to this game and thankfully the second half we were able to string together multiple stops. Credit to Northumbria they kept fighting and wouldn’t go away. It feels good to win but even more special for three in a row!”

Loughborough took an 8 point lead after the opening period, 29-21, before Northumbria fought back across the final five minutes of the half to tie up the contest at 48 going into the break.

A fired up Loughborough side went on a 9-3 run over the opening two and a half minutes of the third to take control and would never look back, grabbing a fourteen point advantage heading into the final period.

In the fourth, Northumbria refused to go down without a fight, but ultimately Loughborough proved too much.

“We are bitterly disappointed with the outcome of the game yesterday,” said Northumbria Head Coach Marc Steutel. “However, my pride and feelings for this group have only increased based on how they competed for each other. This group have been instrumental in transforming our programme over the time they have been here to the point where we expect to be competing for national championships and that hasn’t always been the case with our programme historically.

“For the last ever BUCS game to end in a loss for the likes of Troy Baugh, Jack Preston, Lewis Champion, Samuel Ireland, Blayne Freckleton, Danny Horta Darrington and Malcolm Smith hurts immensely. But this doesn’t take away from the fact they are high quality people who have committed so much for myself personally and our programme and for that I will be eternally grateful.

“I am so proud to have been able to lead this BUCS group and will look back on it fondly for years to come.

“Massive credit to Coach Jarram and his side as they were deserved winners and played extremely well. I think Coach Jarram has done an exceptional job with this team and he deserves more credit for his teams performances.”