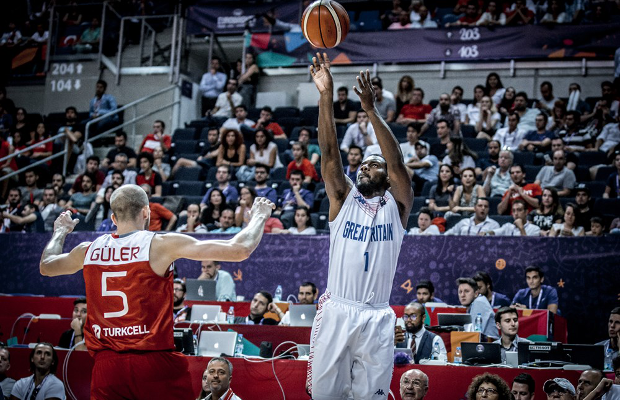 Kyle Johnson and Robert Gilchrist have been called up to the Great Britain Senior Men’s squad, replacing Justin Robinson and Ovie Soko for the upcoming FIBA World Cup 2019 qualification campaign.

Canadian NBL club London Lightning revealed the news on Johnson’s call up Sunday, releasing a statement on their website to say Johnson has been put on the inactive list whilst he joins the GB squad, meanwhile Hoopsfix sources have revealed that Robert Gilchrist has also received a call up, with him originally having meant to be with the England Commonwealth Games’ squad that open training camp in Manchester today.

Both Robinson and Soko were last minute withdrawals, with Soko suffering from an ankle injury, whilst Robinson has had an ongoing groin issue this season which needs recovery time.

Johnson was a part of Great Britain’s EuroBasket 2017 squad, averaging 8.2 points and 3.2 rebounds, and has been a regular in the team since 2011, including suiting up at the London 2012 Olympics, but was not included in the November qualifying window squad.

Meanwhile, Gilchrist, who is playing for the Worcester Wolves in the BBL this season, returns to the squad after a year hiatus, having been one of the final cuts of GB’s EuroBasket 2017 qualifying squad in 2016 after his first call up to play in an exhibition against New Zealand in 2015.

With Alberto Lorenzo taking over the reigns as Head Coach, GB are currently 0-2 with their next games on the road against Israel on February 23 before facing Greece two days later on February 25.