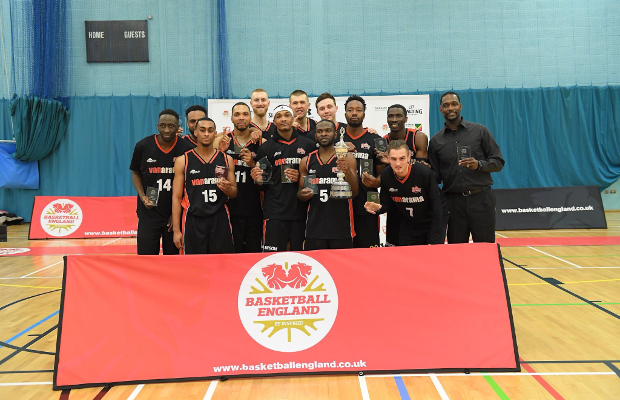 Hemel Storm overturned an early double-digit deficit as they battled back to beat Manchester Magic 94-77 in the 2018 National Cup final, at UEL Sportsdock.

AJ Roberts picked up MVP honours with 33 points, six assists and six steals to lead Storm to their first-ever title in the NBL top-flight having won the Patrons Cup twice in 2011-12.

“It’s a team game and win,” said Roberts post-game. “I want to have fun with the team and the coaches as well. This was big.

“You could just feel the vibe and you want to perform well to make the fans happy.”

Michael Anumba and Stefan Gill shared 23 points in the first quarter to help Magic establish a commanding 19-31 advantage after 10 minutes.

Hemel responded well in the second with back-to-back triples from Walid Mumuni and Jack Burnell sparking a 14-6 spell which helped their side cut the gap to two points at the half, trailing 45-47.

Storm then took control when play resumed with a 25-12 third period opening up an 11-point cushion ahead of the final quarter. Roberts ensured there was no let up, scoring his side’s first 10 points of the fourth as the lead continued to grow.

Manchester were held to just three points in a six-minute spell before a trio of late triples from Gill, though it was not enough as Hemel secured the historic victory.

Head Coach Robert Youngblood added: “I am over the moon right now, I am emotional.

“I wanted to come to Hemel and bring some silverware, because they deserve it.

“I told them to stay positive and if they stay positive, they will turn it around and they did. I feel blessed and happy for this team.”

Wayne Yeboah added 12 points for Storm with Bode Adeluola also in double figures with 10, while Gill finished with 24 in defeat.