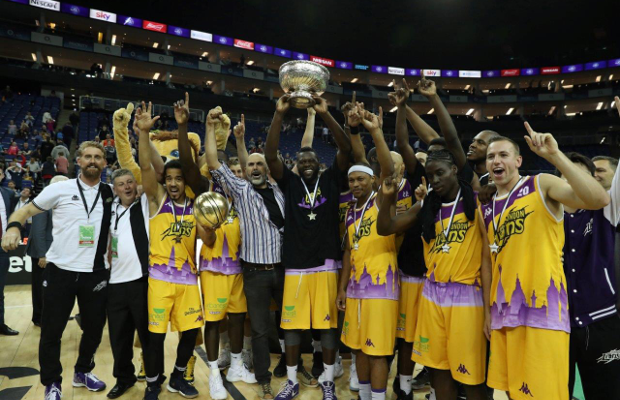 The new fast-paced format – introduced by Matchroom Sport – saw eight BBL sides battle it out over five hours in shortened 12-minute games in a bid for glory in North Greenwich.

Justin Robinson starred for the Lions to pick up MVP honours, though European recruit Momcilo Latinovic impressed throughout the afternoon, Paul Guede locked in on defence and new American forward Brandon Peel produced a pivotal hot stretch in the final.

The Lions came up against Newcastle Eagles in the deciding showdown and despite falling 5-14 behind to back-to-back six-pointers from Jaysean Paige, they rallied with 10 points in their own powerplay.

Eagles edged back in front to lead 19-20 before Peel stepped up with six points in a row in a decisive 7-0 spell with a late five-pointer from Paige proving in vein.

Earlier, the Lions defeated Glasgow Rocks and Bristol Flyers to advance to the last four, where they beat Andreas Kapoulas’ Bristol side once again, while Newcastle had a tougher route.

An opening defeat against the Flyers put the North-East side on the back-foot and they survived with a thrilling double-overtime victory over Glasgow Rocks before seeing off Sheffield Sharks.

More drama followed in the last four clash with Leicester Riders with a late game-winner from Terry Martin sealing the win.

What caught the eye:

The powerplay was one of the better concepts, with a two-minute period of double points for the team that pressed the golden buzzer, even if some teams were caught out by not using within the first 10 minutes.

Assistant coaches played a role – notably Newcastle Eagles’ and Worcester Wolves’ – in executing the powerplay at the optimum time as one of their player lines up an outside shot.

Shorter games allowed chance to see all eight teams in action at least twice, which gives fans a little indication of what to expect in the coming season

London reaching the final helped – the crowd really got behind the hometown team and grew into the event as the day progress, perhaps becoming more accustomed as to what was happening in terms of the new rules.

While the danger of the event setting a false perception for new fans of the sport; game-winners, double overtime thrillers, crossovers, dunks on the fast break are all elements of the game that happen in a full-sized game and that’s what wows spectators, new or old.

What not so much:

Whilst the entertainment was there, the quality was often left wanting at times. Rash shot-selections, careless turnovers were a recurrent theme given the rushed nature of the game.

Dusha, McKnight, Nimley and Paige all connected with the five-point shot, but the list of those who fell way off the mark was considerably longer, although it did bring excitement.

The running clock and no free throws prevented the usual uncertainty of a duration of a game – more of a concern for broadcasters – though when it came to the crucial powerplay periods and late in the game, it proved an unfortunate hindrance.

Eagles made use of the rolling-subs system, much to the frustration of Rob Paternostro during his side’s powerplay. The clock kept ticking regardless and referees were too slow to get the game back ‘live’ from inbounds so this would be an area to look at.

Overall, the reaction has been mixed, as expected, but more positive than in the build-up, which suggests there is a future for the event to continue.

While some former/current players inside the arena did not approve, those at home seemed to be won over, which is a major positive when broadcasting around the world.

Ultimately it will come down to Matchroom to determine what worked and what didn’t and Barry Hearn in deciding whether it’s worth a return for 2018.

Were you at the event? Watched on TV? Or just didn’t want to watch?
Let us know in the comments!