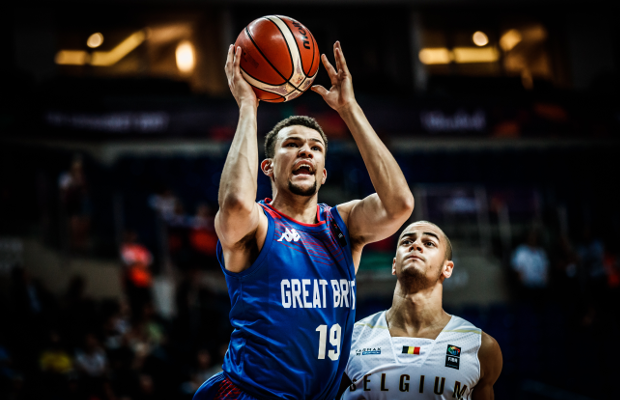 Great Britain’s Senior Men were unable to maintain a bright start to their EuroBasket 2017 campaign in Istanbul, Turkey as they fell to an opening 103-90 loss to Belgium, on Friday.

Joe Prunty’s side led by as many as eight points in the contest, but a costly finish to the third quarter proved decisive.

“It was a hard-fought game, credit to Belgium,” reflected Prunty post-game.

“There were a lot of little plays throughout that made a big difference.

“For us, offensively I liked our ball movement, we took care of the ball with 19 assists and six turnovers.

“At the other end, their threes hurt us, 19 offensive rebounds hurt and then we have to find a way to keep them off the free throw line – 37 is too many.”

Gabe Olaseni shone on his major tournament debut with a team-high 21 points on 9-of-11 shooting along with 11 rebounds, while Dan Clark had 20 points and five assists.

Kieron Achara was also in double figures with 14 points off the bench with Luke Nelson adding 11.

GB were quick to settle with Nelson breaking the deadlock early on, setting the tone for a strong start for the back-court. Clark netted the first three of the game before Belgium responded with back-to-back treys to take their first lead of the game at 11-12.

Foul trouble began to take it’s toll with Kyle Johnson forced to sit after picking up his third as Belgium exploited the mis-match at the 3 spot and capitalised with 10-of-10 at the line in the first quarter.

Achara made an immediate impact off the bench with five points as GB edged ahead at 26-24 to complete a pulsating opening 10 minutes. The GB captain converted a second and-1 early in the second as both teams started red-hot with Belgium’s first four scores all coming from deep.

Clark was the first player to move into double figures with both teams continuing to go back and forth. Belgium edged ahead through the hot-hand of Sam Van Rossum and Jean-Marc Mwema’s tough inside presence, leading the way on the offensive glass.

Olaseni had a perfect first half from the field, adding his sixth basket just before the buzzer as GB went into the interval down 53-54, shooting at 79% from inside the arc as a team, while Belgium persisted with their outside game.

GB quickly re-gained the lead with a 6-0 start and held Belgium to just a single point in a five-minute spell in moving 63-55 in front. Their opponents had missed 14 straight field goal attempts before responding with a pivotal 18-4 tear to take back control and close the quarter up 67-73.

Ben Mockford‘s triple had GB back within four early in the final stanza, but Belgium continued to dominate on the glass and Maxime De Zeeuw – who had game-high 21 points – helped stretch their lead out into double figures.

The gap peaked at 88-74 and Clark sparked a brief rally from GB to get it back to 10, though it was too much to overcome down the stretch as the Belgian Lions passed the century mark to complete an opening victory.